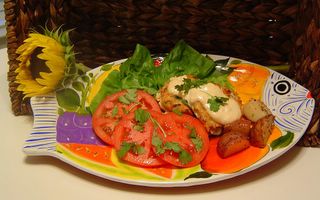 I admit to being an incurable cookbook addict. I have been for years. I have hundreds of them. I still can't possibly go to a bookstore and walk past the bargain book table without perusing the available cookbooks. Some are hopeless, but I figure that if I can find a book with a good recipe or two for a couple of bucks, it's money well spent.

Recently I happened across one of these on my bookshelf, titled "Two Dollar Dinners," by Paul Gayler, (Artus Books, London, 1996). It had a bargain book sticker on it that indicates that I had paid a mere $2.98 for it. I hadn't picked it up for quite a while, and rifled through it to see what I might want to try. There were a number of recipes that I just don't think we're going to talk about: Hot Dog Fusilli, Tian of Sardines, French Onion Soup with Herring Crostini, or Cabbage, Turnip and Blood Sausage Soup.

However, the book fell open to a sure sign of a recipe I had liked: dirty, splashed pages. This one was for "Shanghai fishburgers with cumin and ginger ketchup." A great meal, I thought, for a casual weekend supper. I made a few changes to accommodate my taste, including changing the fishburger title to one more appealing. And voila!

In a food processor, pulse the fish several times, or until just finely minced, not pureed. (Or you can do this by hand.) Transfer to a bowl and add the ginger, onion, cilantro, pepper flakes, soy sauce, eggs and cornstarch. Season lightly with salt and pepper and refrigerate at least an hour, and up to 8 hours.

Mix together all the ingredients for the aioli and refrigerate.

Shape the fish mixture into 8 small croquettes. Heat the oil in a skillet and sauté over medium heat until golden, 3-4 minutes per side. Drain briefly on paper towels. Serve atop a leaf of lettuce with a dollop of aioli on each one. Serves four.
Posted by Alyce at 1:58 PM