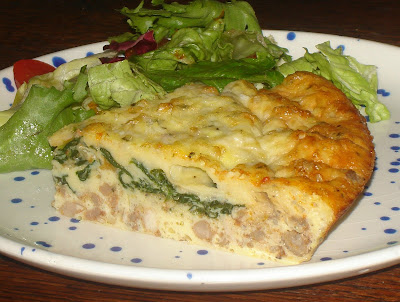 I’ve had several folks ask for “hands-on” classes at the shop, giving each participant a chance to master a skill that might not be easily demonstrated to a group.

The first class I did was a sausage-making class. We made three sausages, stuffed casings, cooked them and had an accompaniment to each. It was a lot of work, but the results were well worth it.

One of the sausages we made was a Spanish style chorizo. For this one, since a coarse grind was important, we ground the meat ourselves with our handy Kitchen-Aid attachment. The seasonings are very different from the Mexican style hot and spicy chorizo. One important ingredient is Pimentón de la Vera, a sort of paprika from central Spain. The peppers used in making it are not dried in the traditional way, in the sun, but smoked slowly for several weeks over an oak fire. It is a wonderful seasoning. Just a touch gives great flavors to leafy greens, beans, rice dishes, fish and pork.

At any rate, the sausage we made using the Pimentón was a huge hit, and we had some left over. I stuck it in the freezer, thinking I would stuff it into casings another time. But I bet you know me well enough by now to know that just didn’t happen!

I had neighbors coming for a Sunday evening supper. There wasn’t enough of the chorizo to serve as sausage but just enough to make a sort of Spanish tortilla. (“Tortilla” is the Spanish word for omelet, as opposed to the Mexican flour tortilla.) Served with a green salad, it was declared quite tasty by all. This would be a perfect brunch dish, too. It can be baked, not done on top of the stove and can be served either hot from the oven, or at room temperature; or you can make it ahead and reheat it.

So, first I am going to give you the recipe for the sausage. You might not want to grind your own pork, but if you do, use something with plenty of fat, like shoulder or Boston butt. Otherwise, call ahead and ask your butcher to grind it for you in “chili grind,” that is, coarsely, and only once through the grinder. And I bet you’re not going to stuff it in casings, either, but you can use it as sausage patties or meatballs. Then use the rest for the Tortilla al Chorizo.

Combine all ingredients. Place in a non-reactive bowl, and refrigerate overnight, covered tightly.
NOTE: Casings are available in small packages from Charlie’s Meat Market. They will also do the pork in the appropriate grind with advance notice.

Preheat the oven to 350o. In a skillet, cook and crumble the sausage just until no longer pink. Transfer to a bowl with a slotted spoon. If there isn’t enough fat left to sauté the onions, add enough olive oil to just film the bottom of the pan. Add the onions and cook, stirring, for a few minutes, or until wilted. Add the spinach and stir and toss until the spinach is wilted.

In a bowl, whisk the eggs with a splash of cold water. Add the cheese and seasonings and whisk until well blended. Pour evenly over the contents of the quiche pan. Bake for 25-30 minutes, until the center is set. Cut into six wedges and serve immediately, or reserve and serve at warm room temperature.

A Toast to Tennessee Wine Festival

If you're not on a barbecue team next weekend, and are looking for a reason for a road trip, you might be interested in this wine and food festival at Nashville Shores. With award winning Tennessee wineries offering a sampling of their finest wines, this festival promises to be most interesting. I might add that I am in a wine tasting group that tried a few Tennessee wines a few years back with less than felicitous results, but I understand that we've come a long way since then!

More than just a showcase for the wine, this event offers gourmet food and fine artisans. After you've tasted and determined your favorites, you are invited to treat yourself to wine by the bottle.

There will be live music, and for the truly interested consumer, there is a series of seminars. 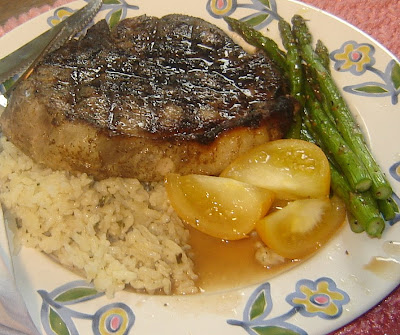 A couple of weeks ago, I issued one of those last-minute dinner invitations to a friend. Normally I have something I can fix on short notice, but I knew my fridge was bare. I stopped by the supermarket and found great looking pork chops on special. I hadn’t done anything with pork chops for a while, so I bought a couple.
Then, at home, I had to decide what to do with them. I pulled out spices I always like with pork, cumin, coriander and cardamom, mixed them with olive oil and rubbed the chops with it.
And then I needed some sort of sauce.
I love beurre blanc, a French sauce that starts with white wine, white wine vinegar, shallots and sometimes herbs, simmered a bit to reduce it and strained. Then, off the flame, chilled butter is whisked in bit by bit to make a creamy sauce that is quite fragile: not enough heat and the butter doesn’t melt, too much and the sauce breaks down. This is a problem that one of my chef friends solves nicely, but in quite an un-traditional manner, with a splash of heavy cream whisked in at the end.
I also love beurre rouge, made the same way with red wine. Both are traditionally served with seafood. Both can be tailored to your taste with the addition of herbs, curry powder, Dijon mustard or spices.
I had a little cream sherry left in a bottle a friend had brought a few weeks before to go with our dessert. There wasn’t enough to serve, but certainly enough to cook with. So: there I am standing at my refrigerator door, looking at that bit of sherry and thinking, "Why can’t I do it with sherry?" And I did. Sort of.
I used the aromatics from the rub, crushed, and simmered them with sherry vinegar and the cream sherry and a shallot. I tasted and adjusted some of the seasonings, and let it set while we grilled the chops. While the chops rested, I finished the sauce. Boy! Was it good!
I had tossed asparagus with a little olive oil and sea salt and grilled them with the chops. About five minutes on the grill gives you a slightly crisp texture and pleasantly smoky flavor. I also cooked rice, and had a couple of yellow tomatoes that I sliced along side. An altogether satisfying dinner!
Middle Eastern Pork with Sherry "Beurre Brun"
2 center cut pork chops, about 1" thick
2 tbsp extra-virgin olive oil
¼ tsp each ground cumin, coriander and cardamom
Sauce:
1 tsp each whole coriander seeds, cumin seeds and black peppercorns
1/4 cup sherry wine vinegar
½ cup cream sherry
1 large shallot, minced
½ cup chicken stock
1 tbsp Worcestershire sauce
4 oz (one stick) butter, very cold, cut into 12 pieces
1 tbsp heavy cream
Mix the ground spices with the olive oil. Rub the mixture all over the pork and let set at room temperature for up to an hour, or cover and refrigerate overnight.
For the sauce, crush the whole spices with a mortar and pestle, or with a rolling pin, or with the side of a heavy knife. In a small pan, add them to the vinegar, sherry and shallot. Simmer until reduced by about half. Remove from the heat, strain and let set until pork is done.
Either grill the pork on a charcoal or gas grill, or under the broiler, about 15 minutes on the first side, and 5 to 10 minutes on the second side, until done to your liking. I prefer my pork a tiny bit pink; it’s a lot juicier that way. Remove to a plate and tent with foil while you finish the sauce.
Reheat the strained sauce until just simmering. Remove from the heat and wait about two minutes. Then begin whisking in the butter piece by piece. When the last piece is in, whisk in the cream. Remove the chops to dinner plates and drizzle with the sauce. Serve immediately. Serves two but doubles or triples easily.