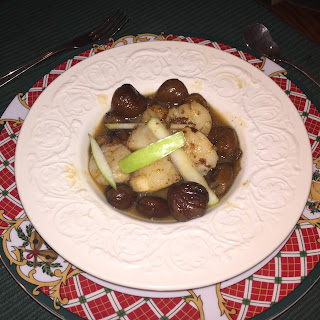 Since I’ve had the knee surgery I’ve been spending a lot of time sitting with it elevated, often with an ice pack on it.  I’m starting to seriously miss my pots and pans and wooden spoons.  I’d found a recipe that sounded interesting and was quick and easy.  I sent my hubby to the Paradise Seafood truck for scallops and called Bryson and Laretha Randolph to come share it.


If you’ve read my blog and my columns in the Commercial Appeal, you may remember that Laretha and I have done a lot of cooking together in the past, resulting in many good dishes to share with you.  When I told her what I wanted to try her comment was “That sounds weird.”


When you’re ready to eat, just sauté the scallops, heat up the sauce in the sauté pan and put it all together.  At first, we just used a few of the apple sticks to garnish, but when we tasted it we realized that the tartness and crunch of the apple was an important part of the appeal of the dish, so use the whole apple for four servings.


I’m not going to give you the whole “dry” versus “processed” scallop lecture.  If you’ve forgotten it, you can find ithere.


You can buy the cooked chestnuts in jars at Fresh Market, Whole Foods, the Williams-Sonoma outlet and some supermarkets.  I always buy whatever is left on sale at the end of the season because I love to use them in other dishes.  One of my favorites is a chestnut-scallop soup. And just recently with Ana Miller, I made an absolutely fabulous Portuguese chestnut torte.  Try them all…but try this one first!!


Squeeze the juice from half a lemon into a medium sized bowl of chilled water.  Rinse and dry the apple.  Cut it in half from stem to blossom end.  Remove the core and cut into thin sticks, dropping them into the lemon water as you work.  Set aside.


In a skillet, over medium heat, melt half the butter.  Add the chestnuts and stir until they start to get a little crispy on the outside and are warmed through.  Set aside.


When ready to serve, in another large skillet melt the rest of the butter over medium-high heat. Pat the scallops with a paper towel to remove any liquid on the outside.  Add the scallops, in batches if necessary to keep from crowding.  Cook until the bottom is nicely browned. Turn and cook a couple of minutes more, until barely cooked through.  Better to undercook than to overcook!  Remove to a warmed bowl, tent with foil and set aside. If doing in two batches, you might need to add the extra tablespoon of butter to the pan.


Pour the sauce into the scallop pan and bring to a simmer, scraping the bottom with a wooden spoon to dissolve any browned bits.  Add the chestnuts with any butter or liquid in the pan.  Stir constantly until everything is heated through.


Divide the chestnuts among four flat soup bowls.  Nestle the scallops in among the chestnuts.  Ladle the sauce over the top and garnish with the apple sticks.  Serve immediately.  Serves four. 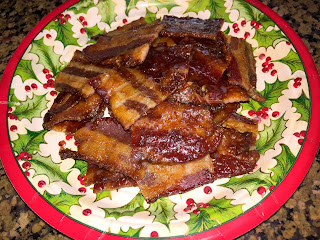 You probably know that I’m in the middle of recovering from knee surgery.  I’m feeling pretty good, but get tired very easily, so I’ve missed my pots and pans and wooden spoons.


At physical therapy on Monday Zach, my therapist, was talking to a colleague about brown sugar bacon.  I told them it was called pig candy, that I had made it several times, and that I’d bring them a recipe.  I did more than that. Today I made it and took some to them.  I’m their new favorite patient, I’m pretty sure.


The first time I had this was at least five years ago. My son, Christopher, lives in Massachusetts, and every summer he has a “Bacon-Beer Fest.” The rules are that you must bring something made with bacon, and a six-pack of beer to share that you haven’t had before.  I don’t remember who brought it, and it wasn’t exactly this recipe, but it disappeared in a heartbeat.


There are many versions. I’ve been making it this way for a couple of years and like the combination of flavors.  Other versions call for tongue tinglers other than the creole seasoning I use:  black pepper, cayenne, ginger, to name a few.  And as I write I bet hot Spanish smoked paprika would be fabulous. I’m going try that next time.


Once made, it’s at its best eaten within a few hours.  You can refrigerate it, and it will still be delicious, but it will soften up some.


Leftovers (Ha! Who am I kidding? Leftovers?) are great chopped and sprinkled on a salad. Or sprinkled on baked sweet potatoes or roasted Brussels sprouts. I have a friend who said she’d chopped hers finely and put into deviled eggs.


Preheat oven to 350o.  Line a rimmed baking sheet with foil and place a cooling rack on top.  Spray heavily with cooking spray.


In a plastic bag place the brown sugar, mustard powder and creole seasoning and mix well.  Drop the bacon in one slice at a time and toss.  Take it out and make sure there aren’t any bare spots on either side.  If so, pat a bit of brown sugar on it and place on the rack.  Don’t let the bacon strips touch. 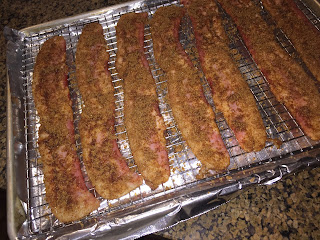 Bake on the top rack of the oven for about 20 minutes.  Then watch pretty carefully until the bacon is done and just crisp but not too brown. In my oven, with the Wright’s bacon I use, it takes 25-27 minutes. 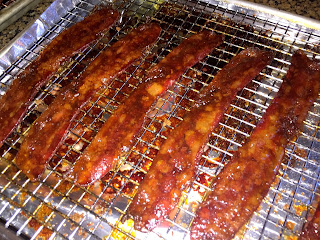 Remove the pan from the oven and let cool briefly.  Then remove the bacon carefully to a surface lined with parchment or waxed paper.  While still slightly warm, use cooking shears to cut each slice into four or five pieces.  And hide them from yourself until the guests get there!
Posted by Alyce at 2:19 PM 1 comment: