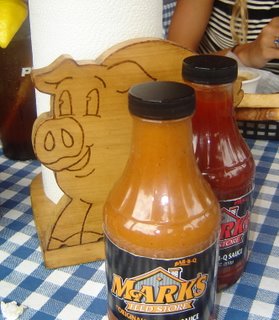 On her blog, Whining and Dining (see the link on the right), Leslie Kelley alerted us to the fact that cheaptickets.com had listed their top destinations for barbecue over the Fourth of July weekend--and Memphis was not among them!

One of the places listed was Mark's Feed Store in Louisville, KY, my home town. Today I am there, visiting my parents, so I convinced them they should join my sister, our niece and me there for lunch.

I hadn't been before, since my mom cooks so well that we don't usually eat out when I'm there. And when my sister is also in town, and we go out for dinner together, we are NOT looking for barbecue! There are too many great restaurants in Louisville to do that.

We got there just ahead of the crowd, which was a good thing, since by the time we left, there were no parking places in the lot, and the only empty tables were a few two-tops. 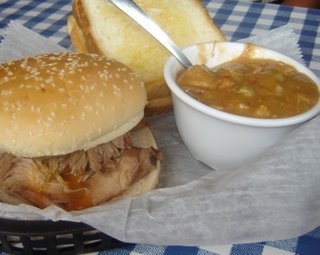 It isn't far from my niece's home, so she had been there several times before. She didn't even look at the menu, and ordered the pork sandwich with burgoo. My mom always eats chicken and asked for no sauce on her chicken. My dad, as always ordered the ribs, my sister got the pork plate, substituting potato salad for the spicy fries, and I got the pork sandwich, substituting the deep-fried corn for the fries. The waitress was very obliging as we each made our own variations to the menu combos. 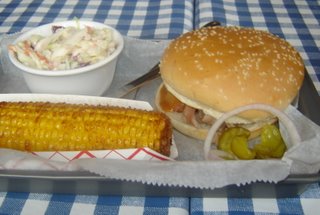 It came out promptly and the waitress did not have to ask "Who got the chicken?" but quite professionally delivered the right plates to the right people.

The chicken, served on the bone, came without sauce, as requested, but seemed to me to be a bit dry and overcooked. I didn't taste the ribs, but my dad said they were good, but without a deep-smoked flavor. The pulled pork was very tender and juicy, but again, lacked the definite smoky flavor that we get here in Memphis at the local joints. The interesting thing was the house sauce, which was a definite mustardy yellow. I had tasted it alone (bottles were on the table) and hadn't particularly liked it, but it also came on the sandwiches, and was much better on the pork.

Burgoo is a soup with its roots in Western Kentucky. Long cooked, with a variety of meats and vegetables, it should be dark and rich and only mildly spicy. This was sort of "gluey," as if it had been thickened with flour, and the dominant flavor was hot pepper. If you'd never had it at the source (Owensboro, KY, where I was born), you wouldn't go out of your way for it after tasting this version.

SO: How did it measure up to our Memphis BBQ? Not even close, if you like the good smoky flavor you get from most of our locally owned spots. The pork itself was tasty, as were the ribs. I loved the deep-fried corn on the cob. Two thumbs down for both the chicken and the burgoo. Thumbs up on the cheerful and efficient service. The mustardy house sauce is a matter of taste; everyone else liked it better than I did.

Will I go back there again? With all the great restaurants in Louisville? No way!
Posted by Alyce at 12:49 PM 4 comments: 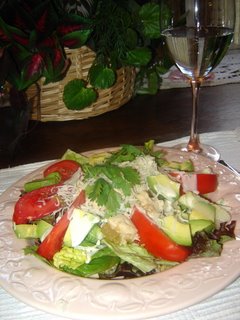 In the heat of summer, it’s hard to get excited about turning on the stove or the oven. A salad hits the spot, and with a little enhancement, a salad of canned tuna can become dinner. I like to use tuna packed in olive oil; I think it has a lot more flavor than the water packed type. You, however, must make your own decision about that.

If you are feeling a little more ambitious, you could replace the canned tuna with 12 ounces of fresh tuna, brushed with a little soy sauce and olive oil and grilled to medium-rare. Sliced thin and fanned out over the top, it makes a lovely plate. You could also toss the tuna, avocado and tomato with the greens and dressing, but I find the good stuff always goes to the bottom of the salad bowl when I do that.

I love the bags of pre-washed salad mixes from the produce section of the supermarket. You may use whatever blend you like best. Or you could wash and crisp your own lettuce…but I almost never do anymore. I like to serve this with packaged lime-flavored tortilla chips but crusty bread or even crisp crackers would be good as well.

I hope your friends and family enjoy this as much as mine did!

Mix all the dressing ingredients and chill at least an hour, or, better, overnight, to mellow.

Drain the tuna and flake into large chunks. Core the tomatoes and cut into thin wedges. Peel the avocados and cut into 1/2” dice.

Put the salad greens on a large platter, or divide among four serving plates. Mound the tuna in the center and arrange the avocado and tomato around it. Drizzle with half the dressing. Scatter the cheese, chiles and cilantro sprigs over the top. Pass the additional dressing at the table. Serves 4 generously.

NOTE: If my guests are folks that I know will appreciate it, I might add half of a jalapeno pepper, seeded and deveined, and very finely minced, to the dressing. Or even a whole one.
Posted by Alyce at 5:37 PM No comments: 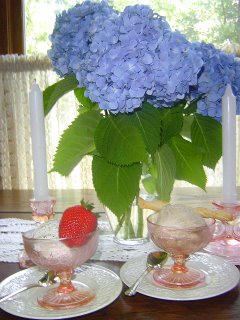 Both my mother and father were from a rural part of Western Kentucky. They, as did some of their brothers and sisters, went off to the big city to make their fortunes, but some of my fondest memories are the times we would load up our car and head "down in the country" for the weekends. With wax-paper wrapped fried egg sandwiches for when we got hungry, we would make the three hour trip, singing all the songs we knew and asking "when are we going to get there?"

One thing we knew would happen at some point any summer weekend: one of the daddies would get in the car and go the few miles down the road to the ice-house, and pick up a couple of big blocks of ice (one grandmother still had a true "ice box"). While one of the aunts would whip up the ice cream mixture, the men would take an ice pick and chip those blocks into a big washtub. The ice cream would go into the tank of a big crank-type freezer. Ice and rock salt would get packed around it. Then we would all take turns cranking, the youngest of us first, while it was still easy to turn. As it started to freeze, it took a bit more muscle, until the last few minutes had to be done by one of the daddies.

A towel would be draped across it while we consumed vast quantities of fried chicken, home-cured ham, homegrown veggies and salads.

Finally we would dip into the ice cream, and I’ll tell you, to this day I can’t think of anything better! Usually it would be vanilla, with berries, fruit, or homemade syrups to pour on top. If there were lots of us, there might be two freezers, and the second would be for the more adventurous: banana, peach, or pineapple.

I still have a freezer of the same size, although mine is electrically cranked. It makes a couple of gallons of ice cream, quite a lot for a dinner party at the house. And it’s still a lot of trouble. But if you love homemade ice cream, and haven’t discovered those you can find now with a cartridge that lives in your freezer until you need it, you have a treat in store! Available at most cookware and discount stores, it makes a quart, perfect for six to eight guests. I even ordered an extra cartridge, so I can offer two different flavors, if I want, since the freezing process takes only about a half-hour.

So pick up some fried chicken, make your favorite potato salad, and then treat your family and friends to homemade ice cream…and not just your normal vanilla! The black pepper ice cream will surprise you. A favorite dessert in Italy is strawberries with freshly ground black pepper and a drizzle of balsamic vinegar. Here’s the ice cream ready for just the berries. And the brown sugar-ginger flavor will be good with any fresh fruit, or on its own with just a crisp cookie. Both need to be made in plenty of time to chill well before freezing, so take that into consideration. Both are just the right size for the cartridge type freezer. Your friends will feel so pampered—we won’t tell them how easy it was!

BLACK PEPPER ICE CREAM
2 cups heavy cream
8 whole allspice berries, coarsely crushed
1/2 cup sugar
1 tsp vanilla
4 egg yolks
1 tbsp black peppercorns, crushed
2 tbsp good quality balsamic vinegar
In a heavy saucepan, combine cream, allspice berries and 1/4 cup sugar and bring just to a simmer. In a large bowl, whisk together the eggs and remaining 1/4 cup sugar until the mixture is thick and pale, about 5 minutes. Pour in the cream mixture, whisking constantly. Pour the mixture back into the pan and cook over medium-low heat, stirring constantly, until it lightly coats the back of a spoon. DO NOT LET BOIL! Remove from the heat and let stand for about 20 minutes, then strain though a fine sieve into another bowl. Chill thoroughly. Stir in the black peppercorns and the balsamic vinegar and freeze in an ice cream maker according to the manufacturer’s instructions.

BROWN SUGAR-GINGER ICE CREAM
4 egg yolks
1/2 cup dark brown sugar, packed
1/4 cup granulated sugar
1 1/2 tsp pure vanilla extract
2 cups half-and-half, warmed
1 tbsp ground ginger
Combine egg yolks, sugars and vanilla in a large bowl. Whisk or beat until fluffy and light. Add the warm cream, whisking constantly. Whisk in the ground ginger. Transfer to a heavy pan and cook over medium-low heat, whisking constantly, until slightly thickened, and coats the back of a spoon. DO NOT LET BOIL! Pour into a bowl and chill thoroughly. Freeze in an ice cream maker and freeze according to the manufacturer’s directions.
Posted by Alyce at 1:54 PM No comments: