Several folks have expressed interest in the goodies at my son's annual Bacon-Beer Fest, held a couple of weeks ago near his home in Massachusetts. This is by no means everything, but should give you some kind of idea of all the treats! 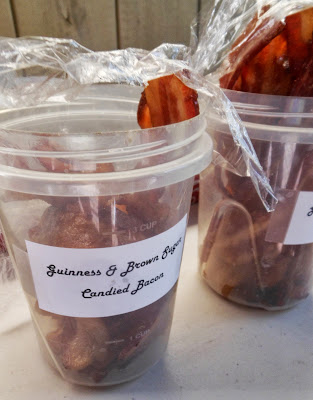 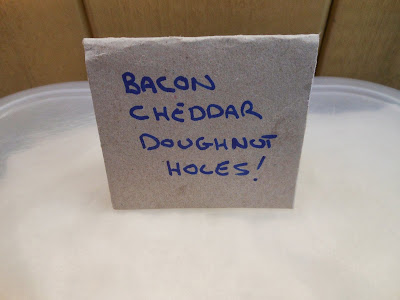 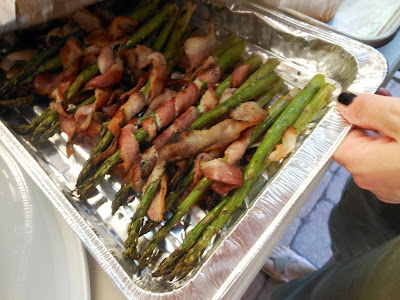 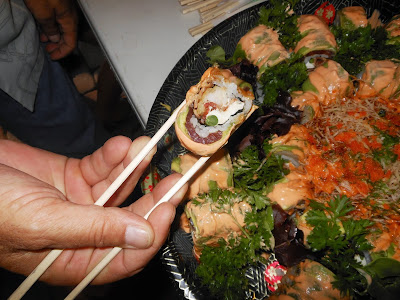 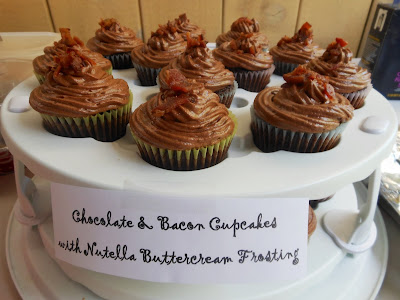 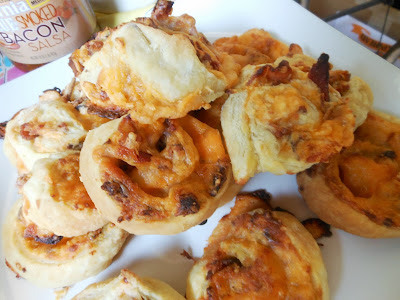 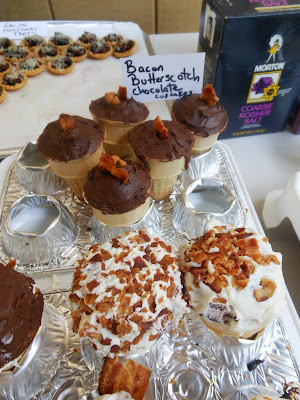 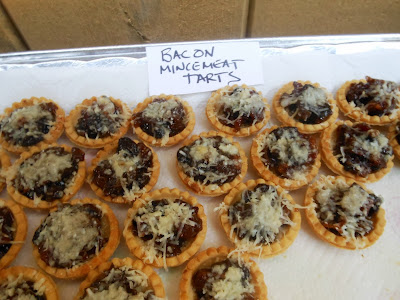 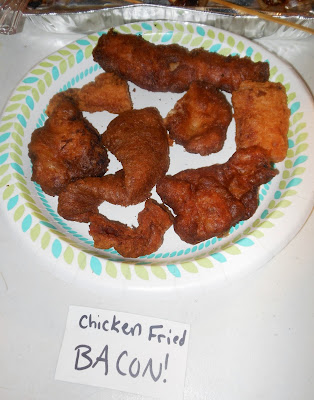 Cool salad for a hot day! 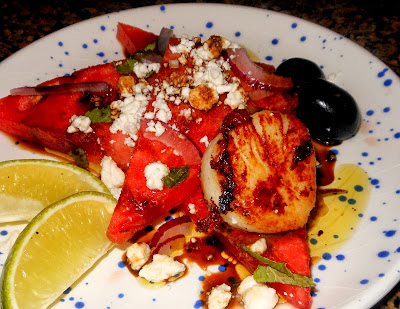 When I go to the farmers’ markets, I can pick a cantaloupe perfectly almost every time: it needs to be a little soft around the stem end, and smell like melon on the outside. But the art of properly picking a ripe sweet watermelon eludes me. I just can’t quite understand the sound I need to get when I thump on it.
So I always ask someone at the market to pick one for me.  Most of the time that works.  I did that last week, even though I thought I had no real need for a watermelon. That big pile of melons was just calling out to me. And boy, was it a good one!
And then I passed the Paradise Seafood truck and couldn’t resist a container of scallops. I was having guests that evening, and turned the watermelon and scallops into a very nice first course salad.
I’m not going to give you the full scallop lecture; you’ve heard it from me before. Just remember “dry” scallops are un-processed.  The two places I know you can always get them are at the Paradise Seafood trucks at most of the farmers’ markets, or Thomas Meat Market in Collierville. Ask before you buy anywhere else.
For the past few years, balsamic vinegar has been hugely popular. What we get in most stores is not real balsamic, which can be made only in Italy, in Modena or neighboring Reggio Emilia. Aged in several different wood barrels for a minimum of 12 years, and sold in distinctive bottles, it’s not the real thing unless the word “tradizionale” is in the name. And it will set you back a minimum of $70 for a small bottle.
What you see in groceries may just be labeled balsamic vinegar.  These are usually made of wine vinegar with caramel coloring and flavoring. Read the ingredient label. These might sell for under $10 and are not worth buying.  But when you get up a bit in price, you can finds ones labeled “Balsamic Vinegar of Modena.” Aged for at least three years, these come closer to the taste of “real” balsamic. The flavor can be enhanced by reducing it down by about 25%. This is what I did for this salad.
I didn’t use salad greens with this, but the slight bitterness of arugula would be perfect with the other flavors if you’d like to have something green on the plate. Either way, the addition of lime wedges to squeeze over at serving time definitely enhances the flavors.
You can have everything prepped for the salad, and assemble just before your guests arrive. Then at serving time, just sear your scallops, drizzle with the oil, garnish and you’re ready to serve.
Mediterranean Watermelon Salad with Scallops
½ medium seedless watermelon
1 small red onion, cut into very thin slices
3/4 cup mint leaves, lightly packed, slivered
1 cup feta cheese, crumbled
1 cup Balsamic vinegar, reduced slightly and cooled
1 pound dry scallops
1 tablespoon Cavender’s Greek Seasoning
2 tablespoons all purpose flour
Good fruity olive oil
Pitted kalamata olives
Lime wedges.
Cut the watermelon half lengthwise into two quarters. Turn on the side and slice ¾” thick. Cut the ripe meat away from the rind and discard the rind. Cut each wedge into two triangles. Place on a baking sheet and sprinkle with the onion and mint leaves. Cover and refrigerate until ready to assemble.                                    Arrange the watermelon on individual serving plates and sprinkle with any mint or onion that might have fallen off. Sprinkle with the feta cheese and drizzle with the balsamic vinegar.
Pat the scallops dry and dust one side with a mixture of the Cavender’s seasoning and flour. Heat a thin film of olive oil in a non-stick skillet over medium-high heat. Add the scallops, floured side down, and sear for about 5 minutes, until nicely browned. Turn and cook two to three minutes more. Place one atop each salad.
Drizzle lightly with additional olive oil, garnish with the olives and lime wedges and serve immediately.  Serves 6 to 8.

Another cold soup for hot days! 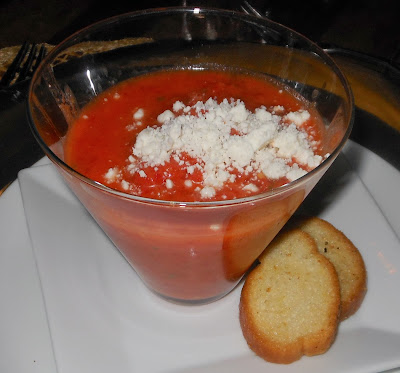 A few weeks ago I gave you a recipe for a chilled pear soup with cardamom. I was surprised at the number of emails I received saying they’d tried it and loved it, and asking for more chilled soups.
The second best part about chilled soups—the very best part is how tasty and refreshing they are in summer—is that they must be done ahead.  That leaves your time just before serving dinner free for other tasks, or for just socializing.
This soup is based on a recipe I found in the French culinary magazine Cuisine et Vins de France. I made it once for our wine dinner club, and it was so good that I’ve served it four times since.  That’s really rare for me! It’s the perfect beginning to a main course salad dinner, or for dinner on the grill. It also makes a great brunch soup beside a quiche or frittata.
This soup will keep beautifully for several days in the fridge. I had less than a cup left the last time I served it, and it made a pretty tasty sauce over a grilled chicken breast. I think it would be good on fish or shrimp as well.
Red Bell Pepper Gazpacho with Goat Cheese
4 red bell peppers (See note below)
4 large very ripe tomatoes
2 garlic cloves, chopped
2 tbsp. sherry wine vinegar
1 tbsp. kosher salt
6 oz. goat cheese crumbles, divided
1 tbsp. honey
3 tbsp. olive oil
1/3 cup fresh basil leaves, packed
Over a very hot grill or a gas flame, or under the broiler of your oven, roast the peppers until the peel is very dark and charred, turning often. Place into a paper bag, roll the top to close and let rest until completely cool.  When cool, rub off as much of the skin as you can. You should be able to get most of it, but a little stubborn bit here and there won’t hurt. Cut in half and remove the stem, seeds and veins. Cut into chunks and place in a large glass bowl.
Cut the tomatoes in half crosswise. Using a small spoon, scoop the seeds into a strainer set over a small bowl. Cut out the core and cut the unpeeled tomatoes into chunks. Add to the bowl with the peppers.
With a rubber spatula, rub the juice around the seeds through the strainer. Discard the seeds and add the juice to the bowl, along with the garlic, sherry wine vinegar and salt. Toss to combine, cover and refrigerate at least four hours.
Working in batches, in a blender or food processor pulse the pepper mixture with 2 tbsp. goat cheese, the honey, olive oil and basil. It should be just a little bit chunky, not perfectly smooth. Taste and add salt if needed.
When ready to serve, pour into small glasses or clear bowls. Sprinkle with the remaining goat cheese and serve at once. Serves 6-8.
NOTE: I roasted my own peppers, but if you prefer, you can substitute two 12-oz. jars of roasted peppers, drained.
﻿