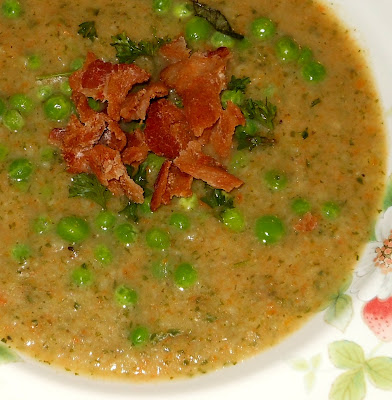 In my much younger days I spent a summer working in Paris as part of an exchange program at the University of Louisville.  My parents had hosted many of the French students who had come to U. of L. in prior years. The mother of one of those French students, Madame Chevé, nearly adopted me. I worked not far from their apartment, and would come often for dinner, arriving well before the rest of the family. She would give me small tasks to do to help in dinner preparation.
On a few occasions, one of the tasks was to shell fresh peas. This was not something I’d ever done before, but certainly not a difficult chore.  Several times, she made a soup she called “Potage Saint-Germain.” I wrote down almost all her recipes, and when I came home, this was one I liked to make. Later, in “classic” French cookbooks, I found recipes that were quite different. The peas were pureed, there were fewer vegetables, there was lots more butter¸ and often it was thickened with an egg yolk at the end.
But this is the version I’ve made all these years. I like to use arugula for the greens, because I like the slightly spicy flavor.  Other greens, such as spinach, or even the dark green tops of romaine would work well.
This can be made more substantial with diced ham added after the soup has been pureed.  The heavy cream makes it richer but I prefer it without. I like to top it with crumbled bacon, but a dollop of sour cream, or a sprinkle of minced fresh herbs (whatever you used in the soup), or snipped chives would work just as well.
You can make the soup base as far as the blending well ahead and keep chilled. Then reheat the soup, add the peas and simmer briefly.  What a great soup, then, for entertaining friends on a spring day!

1 leek
3 tbsp. butter
1 12-oz. package frozen mirepoix mix (see note)
1 tbsp. packed, fresh tarragon, thyme or mint (or 1 tsp. dried tarragon or thyme)
4 cups chicken stock
1 cup potatoes, peeled and diced
1 cup, packed, dark leafy greens
Salt and pepper to taste
½ cup heavy cream (optional)
2 cups shelled fresh peas (or one 12-oz. package frozen, thawed)
Bacon crumbles, herbs or sour cream, for garnish
Cut the root end and the thick fibrous top off the leeks, leaving the white and pale green part. Slice in half lengthwise and rinse under running water, making sure any grit or dirt is gone. Slice crosswise and reserve.
In a Dutch oven or other heavy pot, melt the butter. Add the mirepoix mix and the leeks. Cook over medium-low heat until the vegetables are tender but not browned. If using thyme or tarragon, add it now. Stir a couple of times and add the chicken stock and potatoes.
Bring to a boil, cover and simmer until potatoes are very tender, 15-20 minutes. Stir in the greens and let set about 10 minutes. With a blender, food processor or hand blender, puree the soup.  Flecks of the green will remain, and that’s a good thing.  Season to taste with salt and pepper.
When ready to serve, bring back to a simmer and add the peas.  If using fresh mint, add it now. Simmer just long enough for the peas to heat through. Ladle into soup bowls and garnish as desired.
Makes four main course servings, or six first course servings.
NOTE: You may replace the frozen mirepoix mix with one cup chopped onion and ½ cup each chopped carrot and celery. But the frozen is easy, time-saving and gives excellent results in a soup to be blended later. 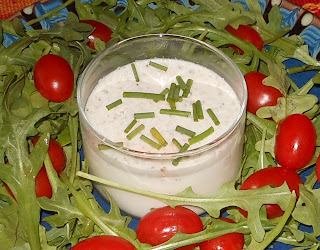 Those who read regularly know that I love the Italian dessert, panna cotta. Over the years, I’ve featured it in several variations.  So when I spied a recipe for a savory one in the French culinary magazine Cuisines et Vins de France, of course I had to try it.
Titled “Panna Cotta Salée au Bacon,” it is shown as an appetizer. The French have been very fond recently of appetizers and desserts served in little glasses called verrines.  The recipe said it served four, but from similar quantities (converted from the metric) I got six servings, and still they were a bit rich to serve as an appetizer for any but the lightest of main courses.
But served as a brunch dish, it was perfect with a salad of arugula and grape tomatoes.   Think of it as a BLT sort of brunch dish.
I like panna cotta with just enough gelatin to set, served in its own dish. The consistency is silkier and more agreeable to me. But it would look lovely unmolded on top of the salad. In that case you would need to add one more envelope of gelatin. You would probably need a bit more water for the softening process.
The recipe called for all heavy cream. I used half-and-half instead, and substituted a cup of sour cream for part of it because I like the flavor. One of my friends suggested it could be lightened even more by using non-fat Greek yogurt for that cup of sour cream. I haven’t tried that, but it should work.
For the dessert at this brunch, to carry on the French theme, I put scoops of peach sorbet from the supermarket into small wine glasses and splashed a jigger or so of the French apéritif Lillet on top. Guests enjoyed the sorbet with a small spoon, then drank what was left in the glass. Yummy stuff.
Vive la cuisine française!

In a flat bowl, sprinkle the gelatin evenly over the water, making sure all the gelatin is moistened. Set aside.
In a medium saucepan, simmer the bacon and onion in the butter until the onion is very soft, but not browned, about 10 minutes.  Drain through a wire strainer over a small bowl. Return to the saucepan and add the cream.  Simmer over very low heat, stirring occasionally, about 10 minutes.  Remove from the heat and let cool for about 10 minutes.
In a blender or food processor, or with a hand blender, puree the cream, bacon and onion until very smooth.  Whisk in the sour cream and divide among four (for brunch) or six (for appetizer) serving bowls or small glasses.
Chill for at least four and up to 24 hours.  Garnish with snipped chives to serve as an appetizer.  Or, for brunch, serve chilled with a salad of tomatoes and your preferred greens, dressed with a simple vinaigrette dressing. Serves four to six.
Posted by Alyce at 7:19 PM No comments:

Chicken Soup for the Foodie Soul 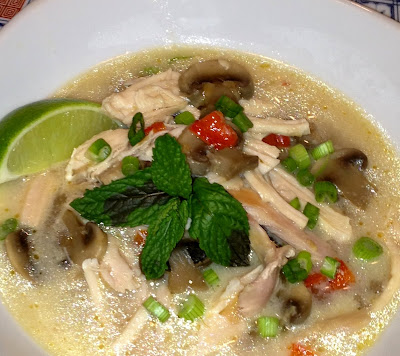 I had a friend who’d had some surgery, and I wanted to take something to cheer her up. “Chicken Soup,” I thought, but this isn’t the kind of friend you’d send a plain chicken-noodle or chicken-rice soup. She is far too much of a foodie for that.
I’d seen a few recipes for a Thai chicken soup and thought that would be right up her alley. Most call for lemongrass stalks and ginger root and coconut milk.  That sounded pretty good to me, so I took a few different recipes and put them together to my liking.
I bet you don’t keep a spare lemongrass stalk or two in your fridge, and probably not always a knob of fresh ginger. I know I don’t, but I’ve found a great substitute for both. In the produce section of most markets are tubes of various seasoning pastes.
The lemongrass has the advantage of being very finely textured. The fresh stalks are very fibrous and tough. If you use real lemongrass, either you must mince the usable part to almost a paste, or leave it in larger chunks and fish out later.
Fresh ginger isn’t so hard to use, but I always buy a chunk and wind up with a dry shriveled end piece or two that I find later when I give my produce drawer a good cleaning.  I always keep both kinds of paste in my fridge. Of course, if you prefer, in this recipe you can substitute the same amount of very finely minced of either or both.
The amount of chicken required here is about what you’ll get off one of the rotisserie chickens available almost anywhere you’d buy groceries.  Of course, you could roast your own chicken. I like including the dark meat of a whole chicken, but if you prefer all white meat you can roast or poach 1 ½ to 2 pounds of boneless chicken breast and shred that.
I made enough to take to my friend and to keep some for ourselves.  For my friend I sent cilantro along with the sliced green onion for garnish. My husband isn’t fond of cilantro, so I used mint for our share. I’d be hard-pressed to say which version I preferred, so you may use either.
To accompany this soup, you might buy pre-shredded cole slaw mix, add some fine strips of red bell pepper, green onions, cilantro or mint. Dressed with a splash of bottled Asian sesame-ginger dressing and you have a meal fit for any foodie friends, sick or not.
Alyce’s Thai Chicken Soup
1 tbsp. vegetable oil
1 red bell pepper, seeded and chopped
1 small onion, chopped
8 plump cloves garlic, very thinly sliced
1 8-oz. container white button mushrooms, sliced
2 tbsp. each lemongrass paste and ginger paste
2 tbsp. Thai sweet chili sauce (or more to taste)
4 cups chicken stock
1 can (14-16 oz.) coconut milk
4 to 5 cups shredded cooked chicken
Finely grated zest and juice of one lime
1 cup green onion, mostly the green part, sliced, for garnish
1 cup cilantro or mint leaves, chopped, for garnish
1 lime, cut into 8 wedges, for garnish
Heat the vegetable oil in a heavy pot over medium heat.  Add the bell pepper, onion and garlic. Cook, stirring occasionally until the vegetables start to soften. Add the mushrooms, stir well to cover with the oil. Continue to cook, stirring frequently, for about five minutes. Add the sweet chili sauce, stock and coconut milk.  Bring to a low boil, reduce heat to low and simmer about 10 minutes. Add chicken and lime juice and zest and simmer another five minutes.
Ladle into flat soup plates and sprinkle with green onion and herb of choice. Put a lime slice on the side to be squeezed over the top at the table. Serves six to eight.