I saw a can labeled "Cuitlachoche" when I was at the Winchester Road market and didn't know what it was. Now I know. Here's the scoop, and I'm sorry I asked....
Posted by Alyce at 12:04 PM 2 comments: 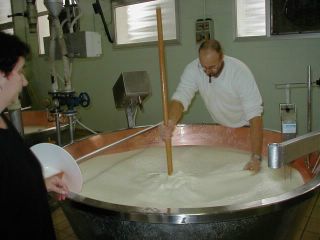 Recently I was talking to a customer about the reasons American artisan cheeses--and there are some truly outstanding ones--are so much pricier than similar European cheeses.

We talked about the many USDA and local rules and regulations, frequent inspections, forms to be filled out about the origin of the milk and other products used, and the myriad other reasons that make it tough for American cheese-makers to compete, even though the import prices have to include any duties and tariffs, and transportation.

I was reminded of the last time I was in Italy and visited a maker of Parmigiano-Reggiano. This creamery made only three 80-pound wheels of Parmigiano-Reggiano a day. The milk was delivered by the local dairy farmers. I missed that part, since I had gotten lost (again!!) and was a little late getting there. But the milk was flowing through open troughs to the vats where it was processed. The plant was immaculate, but we saw cheese in open draining racks, open brining vats and open storage areas.

I was particularly amused by this shot of "il patron" stirring the curds wearing his watch and with an ever-present cigar dangling about the cheese vat. Boy, would our Health Department be all over that!!

Do you think maybe we carry this health thing a bit too far in our country?
Posted by Alyce at 3:42 PM No comments:

A Tasty Treat from an Italian Street Market 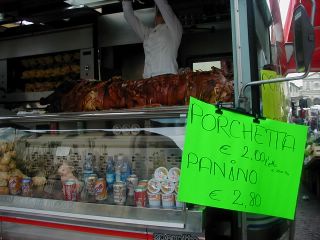 Porchetta in the Greve-in-Chianti local market

If you have ever been to the open-air market day in most any small town in Italy, particularly in the north, chances are you have seen the porchetta (pronounced "pork-etta") truck. This is a trailer with sides that fold up to form a canopy. When opened they reveal a wide counter upon which rests a whole roast pig.

The night before, the pig had been partially boned. The organs were cleaned, cooked and chopped and stuffed back into the cavity with handfuls of sage, rosemary, garlic, spices and plenty of salt and pepper. Then it was rolled, tied and slow-roasted in a wood-burning oven until the meat was done and the skin was brown and crispy.

The longest line in the market quickly forms, waiting for the porchetta man to slice off chunks of tender, juicy, highly seasoned meat, place it on a hard roll and top it with some of the stuffing and cooking juices and a dollop of salsa verde. He'll ask you how much fat you want; you will want some to moisten the meat a bit, and certainly some of the crackling skin.

Although once strictly street food, now you can find it in some Italian restaurants, served as a main course with salsa verde and mostarda, a spicy sort of pickled fruit relish. Accompanied by roasted potatoes and onions drizzled with the pan juices, this makes a lusty meal to share with friends.

Now I don't know about you, but my oven is a teensy bit small for a whole pig. However a boned Boston butt makes quite an acceptable substitute. If you like the idea of the skin, you can order a skin-on shoulder roast, but I think the flavor of the herbed seasoning penetrates better with a skin-off roast. And heaven knows it's easier to carve! Marinate the roast at least one day, and preferably two days before your dinner.

The seasoning mixture will vary according to the region in Italy. I like a mixture of herbs and spices that are reminiscent of the flavors of the island of Sicily, a crossroad in the Mediterranean with influences from the Middle East as well as from the Italian mainland. For a more Tuscan/Umbrian flavor, omit the cinnamon, allspice and nutmeg and add 1 tablespoon of chopped fennel seed and 1/2 to 1 teaspoon of crushed hot red pepper flakes instead.

If you want to serve this as sandwiches, be sure to use good crusty rolls so they don't fall apart when drizzled with the pan juices. If you serve it as a main course, roast chunks of onion and potato drizzled with salt, pepper and olive oil in a separate baking dish for the last hour of cooking. Either way, a green salad with a light vinaigrette rounds out the meal nicely.

The salsa verde can be made earlier in the afternoon. For the mostarda, difficult to find here, Marcella Hazan, in her most recent book "Marcella Says," recommends mixing Hero brand quince, apricot or bitter orange preserves with spicy brown mustard to taste as a substitute. She used Colman's; I used Dijon.

For dessert, an assortment of purchased Italian-style cookies, biscotti, pizzelle, and amaretti, with steaming cups of espresso to dip them in, makes a great ending.

Mix everything except the pork in a food processor and pulse until a coarse paste is formed. With a small sharp knife, make slits about 2" deep and about 2" apart all over the surface of the meat. Using your fingers, press some of the paste down into each slit. Rub plenty of the seasoning into the space where the bone had been, and then rub the rest into the surface of the roast. Cover well and refrigerate overnight, or up to 48 hours.

About 6 hours before serving preheat the oven to 300 F. Remove the roast from the fridge and place in a roasting pan with a snug cover. Roast 40 minutes per pound, basting and turning occasionally. If your pan lid isn't tight enough, you may need to add a bit of water occasionally to keep the pan bottom from going dry.

Remove from the oven and transfer the meat to a serving platter. Add 1 cup of water to the pan and place over medium heat. Bring to a simmer, scraping the bottom of the pan with a wooden spoon to get any browned bits. Place in a sauce boat or serving bowl.

Carve into chunks on the platter and serve, passing the pan sauce and salsa verde at the table. This is typically served at warm room temperature rather than hot, but the pan juices should be warmed. Serves 8-10 with (hopefully!) leftovers.

SALSA VERDE
1 slice firm white bread, crusts removed, crumbled
1/2 cup olive oil
2 tbsp red wine vinegar
2 tbsp capers, drained and rinsed
3 cloves garlic, minced
2 cups parsley, stems removed, loosely packed
2 anchovy filets, chopped
1 tsp Dijon mustard
Put the bread in the food processor and drizzle evenly with the oil and vinegar. Let set for about 5 minutes. Add the remaining ingredients and pulse just until everything is chopped finely. You don't want a smooth paste. It probably won't need salt, but taste to make sure. This is best made shortly before serving, but you can refrigerate it, covered with a layer of olive oil, for a few days. PS Don't you DARE leave out the anchovies!
Posted by Alyce at 3:25 PM No comments: