Faux Food: Is It Still Cheese? 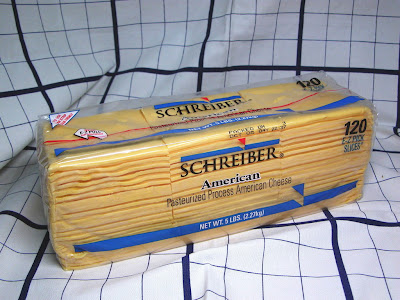 I've often had folks ask for "American cheese", and I always hesitate to sound too pompous by saying "It's not exactly real cheese, you know." I usually wind up recommending a domestic cheddar that has a similar color and melts fairly well. Here's an article that explains about processed cheese!
Posted by Alyce at 9:34 AM 1 comment: 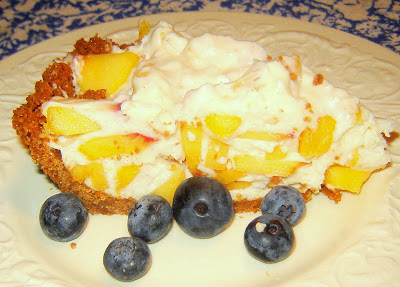 As you probably have noticed by now, desserts are not my strong point. Part of it is that I'm just not that crazy about sweets, and part of it is that if you're still hungry by the time we get to dessert, I sort of get my feelings hurt.

But once in a while, if I find something that's easy to fix and tastes really good, I'll go for it.

A couple of years ago, when peaches were at their best, I wrote about my grand-mother's "Best Peach Pie." I have been very pleased that recently I've had a number of folks tell me that they've saved the recipe and made it again this year. And several have e-mailed or called asking for the recipe again, since they'd lost it.

Recently, I was home again in Louisville and my mom had another peach pie recipe she wanted to try. We made it, and it was easy and very good. It called for a graham cracker crust, and marshmallows.

I changed the graham cracker crust to a ginger snap crumb crust, and made a couple of changes in the original recipe, and it was pronounced quite tasty by the Monday night regular testing committee.

For the baked pie recipe, you needed to find peaches that were ripe and fragrant, but still a little firm. For this recipe, since the peaches aren't cooked, you want peaches that are extremely ripe, and fairly soft. You aren't likely to find the right ripeness in the supermarket, since they need them to last a while. Peaches ripen very nicely, however, in a brown paper bag on your kitchen counter. Of course you will have to plan a couple of days ahead for that, something I'm not very good at.

I find the best peaches for using immediately at the Agri-Center Farmer's Market. Don't worry if there are spots you think are a little too soft. Really ripe peaches may have a few bruised or brown spots; if so just cut them out.

I garnished it with a handful of blueberries. Raspberries would be wonderful, or strawberries, but this is pretty darn good just all by itself!

Place the 2 tbsp water in a small saucepan and sprinkle the gelatin over the top. In a large pan, over low heat, stir the marshmallows and milk together until melted. Stir in the vanilla. Remove from the heat and place the pan with the gelatin on the burner. When the gelatin has melted, stir it into the marshmallow mixture. With a mixer, beat it about 5 minutes on medium speed.

Working quickly, beat the heavy cream in a chilled bowl until stiff peaks form. Fold the peaches into the marshmallow mixture, then the heavy cream. Pour into the prepared crust and chill at least three hours.

Preheat the oven to 350o. In a 9- or 10-inch glass pie pan, mix the crumbs, sugar and butter. Press firmly onto the bottom and up the sides of the pan. Bake for 10 minutes. Let cool completely before proceeding.

Things that make you go "Huh?" 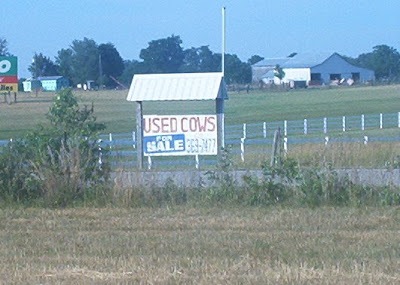 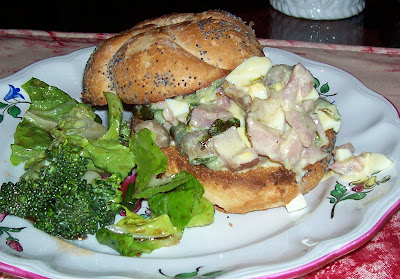 Asparagus is still pretty much a bargain at the markets, and I couldn't be happier! I love it just about anyway you make it. My favorite way of cooking it as a vegetable is sprinkled with sea salt and olive oil and roasted at 400o F for 10-15 minutes, depending on the thickness. And it's a perfect match for ham.

I was blessed recently to have friends bring me a smoked ham from Coursey's in Arkansas. It was one of the best hams I have ever tasted, just smoky enough, lean and tender.

I found a sandwich recipe on the website of the American Egg Board (www.aeb.org) and adapted it a bit to suit my tastes, using roasted asparagus and that wonderful ham.

It's easy and quick to make, but you could make it ahead of time, refrigerate it, and reheat it gently at serving time.

If brunch is on your mind, I think this would be marvelous over toasted English muffins as well. However you enjoy it, I know you'll love it!

Preheat the oven to 400 F. Open the rolls and place cut side up on a baking sheet. Toast in the oven until lightly browned and crisp, 6-8 minutes. Set aside.

In a saucepan, heat the butter over medium heat. Sauté the mushrooms until tender, 7 to 8 minutes. Remove with a slotted spoon and reserve.

In the same pan, combine the Hollandaise sauce mix and the cornstarch. Slowly whisk in the milk until smooth. Bring to a simmer. Cook over low heat, stirring constantly until thickened, about 2 minutes. Whisk in the lemon juice and zest. Remove from the heat and stir in the asparagus, ham and reserved mushrooms. Gently fold in the eggs.

Place the roll bottoms on serving plates and divide the egg mixture among them. Place the tops on and serve immediately. Serves four.

In this week's New York Magazine, there's a recipe from the restaurant Sfoglia, for a yummy sounding strawberry pasta sauce.

We don't have much time left to enjoy our great local strawberries, but this should be good even with supermarket ones. Let me know if you try it!
Posted by Alyce at 12:39 PM 2 comments:

Kitchen Gadget of the Month Club

I should probably wait until Christmas to tell you about the Gadget of the Month Club, but you know me: I'll forget by then. So if you are looking for a gift for the home chef who seems to have it all, I bet this is perfect. A set of odd-sized measuring spoons? A Vacu-Vin pineapple corer? Betcha you don't have one of those!
Posted by Alyce at 4:25 PM No comments:

I'm not a beer drinker, but some of my friends are...and who would have known that there are 32 Things You Can Do with Beer, including bathing in it, using it to loosen rusty bolts, clearing up brown spots in your yard...and more!

So what's the big deal?

I am a little curious as to why the downtown Saturday-only farmers' market is getting so much hype. Prominent chefs and restauranteurs are touting it, it's all over the news, they're on the local morning shows.

And all this for doing about the same thing that the Agri-Center farmers' market has been doing SIX DAYS A WEEK for as long as I can remember. Granted, week days at the Agri-Center aren't as exciting as Saturdays are, but the farmers and growers are there. And on Saturday, there are the herb lady, the flower man, the meat man, the Amish with their canned goods, bakery products, and lots of small farmers selling out of the back of their pick-up trucks.

I have been severely taken to task by several folks about my sporadic posting. It's not as easy now, with my laptop out of commission, to post on a regular schedule, but I promise, I'm gonna try!
Posted by Alyce at 2:25 PM No comments: