A Portuguese Dessert for the Season! 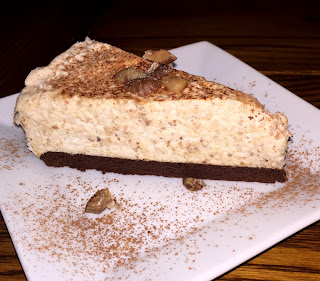 Back in the summer, when we were in Portugal, I picked up a couple of cooking magazines.  I’m sure that doesn’t surprise anyone who knows me.  But although I can cook out of French (of course), Italian and Spanish magazines and cookbooks, Portuguese had me stumped.


But I had a source to help me.  Ana Miller, the wife of our church pastor, is from Brazil, where the language spoken is….Portuguese!  She translated several recipes for me at my request, and this week, she, Pastor Will and their daughter came with a few friends so that I could test them.


Everything turned out well, but the dessert was a total treat.  Rich, yes, but this recipe would easily serve twelve.


I used a jar of roasted chestnuts.  It’s the season; starting around now you can find them at Fresh Market, Whole Foods, Williams-Sonoma and some supermarkets.  At the end of the season every year I buy up all I can find at half price because I have lots of ways to use them: chestnut ravioli, chestnut stuffed onions, or a chestnut scallop soup.


I made the dessert in the morning before the dinner, but the next day the leftovers were still perfect, so you can easily make this a day in advance.


If the recipe isn’t rich enough, or sweet enough, you can add a dollop whipped cream, but really, I don’t think you’ll need it!


For the base:
4 egg yolks plus one large egg
½ cup sugar
2/3 cup unsweetened cocoa powder, sifted
Butter and flour for the pan


Preheat the oven to 350 o.  Butter a 10-inch spring-form pan.  Dust with flour, shaking out the excess.


In a bowl, beat the egg yolks briefly with an electric mixer.  Gradually add the sugar and beat on medium-high speed until creamy and lightened, about five minutes. Gradually add the sifted cocoa powder and beat until well mixed, scraping the sides of the bowl as needed.  Pour into the prepared pan and bake for a about 15 minutes, or until a toothpick inserted near the center comes out clean. Let cool, then remove from the pan and reserve.  Wash the pan and butter the inside.  Cut a piece of parchment or waxed paper to fit inside the base.  Place the cooled base back into the pan.


Wash the mixer beaters and place with a large bowl into the freezer to chill (this makes the cream whip faster).


Put about ¼ cup of water into a wide flat bowl.  Sprinkle the gelatin slowly over the top.  All the gelatin should be moistened.  If the top isn’t, sprinkle with additional water until it is.  Set aside.


Reserve four chestnuts and put the rest into a food processor with the condensed milk.  Process until completely mixed and pretty smooth.


Scrape the gelatin into a small pan with the port.  Warm over low heat just until the gelatin is melted.  Pour into the chestnut mixture and blend well.


In the chilled bowl with the chilled beaters, whip the cream until stiff peaks form.  Fold the chestnut mixture into the cream just until there are no streaks.  Pour onto the cake base in the pan.  Cover and chill until completely set, 4 to 6 hours.


To serve, remove the sides.  Dust first with powdered sugar, then lightly with cocoa powder.  Coarsely chop the reserved chestnuts and spinkle in a circle about halfway from the center to the edge.


NOTE:  If you prefer to use fresh chestnuts, start with about 1 ¼ pounds. Cut an X on the flat side of each.   Cook in lightly salted water until soft, 8 to 10 minutes.  Let cool, then remove the shells and skin.  Proceed as above.
Posted by Alyce at 10:44 PM No comments: