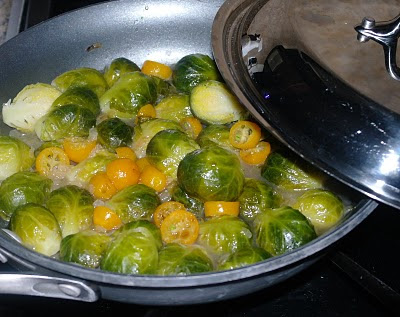 I had some kumquats left over from the yummy chicken-kumquat stew that's going to be in my column in Friday's Commercial Appeal. I remembered that Laretha Randolph put kumquats in with Brussels sprouts and chestnuts for our last Thanksgiving dinner. (I've done Thanksgiving dinner with the Randolphs at their home for at least 13 years.) I didn't have the chestnuts but I did have Brussels sprouts for our dinner tonight. I trimmed them and cut them in half. I heated some bacon fat in a skillet and sautéed a bit of chopped shallot. I put the sprouts in cut side down and let them caramelize for a bit. A half cup of chicken stock went in, and the leftover sliced kumquats. Covered, it simmered until the sprouts were just tender. They made a perfect match for our prosciutto wrapped pork chops...but that's for another post! 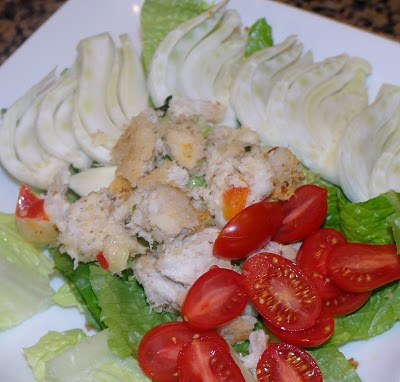 We stopped at Sharky's yesterday evening for a bite to eat in the bar.  I got the crab cakes, which were delicious but I'd had a salad first and just couldn't finish them.  We brought them home, and instead of my usual habit (stick carry-homes in the fridge and toss when they start growing green hair) I decided we needed to use them.  I crumbled them on a bed of lettuce, added slivered fennel and little grape tomatoes.  With a lemon-ginger vinaigrette it made a lovely complement to our dinner! 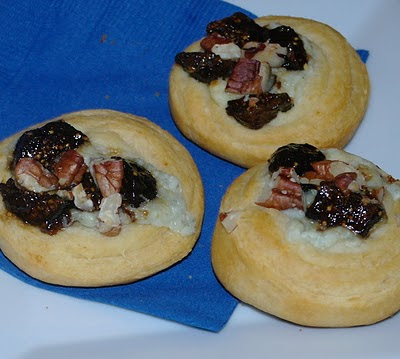 We had some friends for dinner recently, and I was looking for something easy but tasty to serve as a pre-dinner nibble. I wish I could take credit for these, since they were delicious, but the recipe as I made it came almost straight from the Pillsbury web site. I just changes some of the proportions to use the whole bag of figs.

I assembled these about a half hour before the guests were due to arrive. Then I popped them into the oven as the first guest got there. They are best served warm, but I didn’t mind one of the leftovers with my morning cup of tea, either.

These would make a nice addition to a Super Bowl party. I would bake them ahead and leave them on the baking sheet and then warm them at munchie time.

Preheat the oven to 350F. In a small bowl, mash together the cream cheese and blue cheese with a fork until well blended. Set aside.

In a small saucepan, mix the marmalade and vinegar over low heat, whisking to blend. Stir in figs. Simmer over low heat, stirring occasionally, until figs are softened and most of the liquid is absorbed, about 10 minutes. Remove from heat.

Without unrolling the dough, slice each into 14 slices and place 2" apart on two ungreased baking sheets. Press in the center to make a slight indentation in each one. I used a demi-tasse spoon to put about a teaspoon each of the blue cheese first, then the fig mixture. Sprinkle with the walnuts.

The recipe said to bake 15 to 19 minutes, or until golden brown, but mine were perfect at 11 minutes, and I’m pretty sure the oven is calibrated properly. So watch them after 10 minutes. Let cool for a few minutes then remove from the pans with a spatula. Serve warm. Makes 28 pieces. 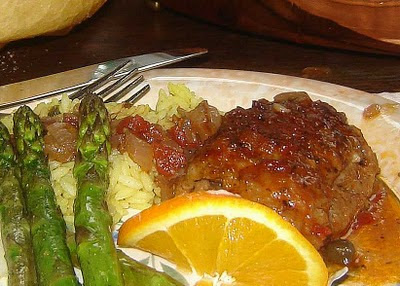 My son, his wife, and my two adorable little grand-daughters live in Massachusetts. It’s a long way from Memphis, but I go as often as I can to see them. One of our traditions is that on the Saturday evening I’m there, I cook for a group of their friends and my daughter-in-law’s family. The number varies, but it rarely is fewer than 20 or so.

A while back, I did it again. The trick to this is finding something that will live up to my reputation, without breaking either the bank or my back!

A "daube" is a French sort of stew: beef braised in red wine with vegetables and herbs. The exact ingredients vary from region to region, but my favorite is the Provençal version, which includes orange zest and juice as part of the aromatic seasonings.

Beef can be pretty expensive, but why not chicken? For any dish that simmers in a highly flavored sauce, I like to use bone-in chicken thighs. The bones add flavor, and the dark meat can be braised long enough to absorb lots of flavor without drying out. I leave the skin on as well. It, too, adds flavor, and can easily be removed at the table by those who prefer skinless poultry.

I tried this first on a small group of neighbors, with rice pilaf and roasted asparagus. A slice of orange added a bit of color and zest to the plate. For the Massachusetts group, which numbered 27, I did it with egg noodles and fresh haricots verts (really skinny green beans), blanched and tossed in garlic butter. Both were served with a green salad for a meal that was simple, very economical and quite tasty.

There were a couple of thighs left over, with some of the sauce. The next day I pulled the meat off the bones, put it into a pan with the sauce, a couple of cups of chicken stock and a bag of frozen Italian vegetables I found in their freezer. Simmered for a bit, it made a really good soup.

If your family insists on white meat, you can use breasts. Then, simmer them on top of the stove for only about 10 minutes after adding the wine and tomatoes, rather than oven braising. It will still be good, but you might need to remove them when they’re done and reduce the sauce a bit. Be careful not to overcook. Either way, I am sure your family and friends will love this as much as mine did!

Preheat the oven to 350o. Rinse and dry the chicken. In a flat bowl, mix the flour, salt, pepper and cinnamon. Dredge the chicken in the flour, shaking off the excess.

In a large heavy skillet, heat the olive oil over medium-high heat. Brown the chicken very well on the skin side, then turn and brown on the underside. As they brown, remove them to a baking dish just large enough to hold all the pieces in one layer.

Reduce the heat under the skillet to medium. Add the butter. Cook the onion and garlic until soft, but not at all browned. Add the rosemary, wine and tomatoes. Bring to a boil, scraping up any of browned bits from the bottom with a wooden spoon. Pour over the chicken in the baking dish. Bake covered for ½ hour.

Finely grate the zest from the orange, then squeeze out all the juice. Uncover the baking dish and stir in the orange zest and juice. Continue to bake uncovered for another 15-20 minutes. Taste the sauce and add salt and pepper if needed. Serves 6.

Chicken with Forty Cloves of Garlic 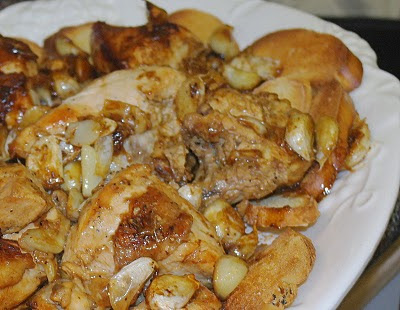 We are fortunate to be members of a wine-oriented dinner club with four other couples. We’ve been going for five years now and every dinner seems to out-shine the last. The host couple picks the theme and the others fill in the other courses, each matched to a wine.

Last week we were at the home of Larry and Mimmye Goode, and the theme was wines from the Rhone Valley in France. They told the story of having gone to a small restaurant in Lyon in search of a dish recommended to them, Chicken with Forty Cloves of Garlic. They were happily surprised later to find mention of the restaurant, Chez Tante Paulette, in a book by Patricia Wells, Food Lovers Guide to France, with the recipe.

This is a classic French dish. I’ve always had it with the garlic stuffed inside a whole chicken that was then roasted, but this was a cut-up chicken, done on top of the stove. It was delicious that way, and quite impressive as Larry brought out the skillet with the flaming cognac.

The garlic turns out meltingly soft and is perfect squeezed out and spread onto the baguette toasts. They served roasted potatoes, but this is such a hearty dish that just a simple green salad would be enough to make a great dinner.

Heat the oil and butter over high heat, in a skillet large enough to hold the chicken in one layer. Season the chicken liberally with salt and pepper. Brown the chicken well on both sides. Reduce the heat a little. Add the unpeeled garlic, pushing them under the chicken so they will brown. Continue to sauté until the garlic skins are lightly browned, about 10 minutes longer. Add the wine and reduce by about half.

While the chicken is cooking, toast the bread on both sides in a hot oven. Cut the peeled garlic clove in half and rub over both sides of the toasts.

Heat the cognac in a small pan for about 20 seconds. Ignite with a match and pour over the chicken. Cook for an additional few minutes, shaking the pan gently a couple of times.

To serve, put the toasts around the edge of a warmed serving platter. Put the chicken on top and scrape the contents of the skillet over it. Sprinkle with parsley and serve immediately. Serves 4.

NOTE: If you don’t have a skillet big enough to hold all the chicken in one layer, divide all ingredients equally between two smaller skillets.