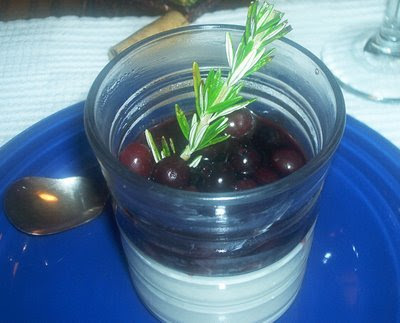 Every so often there are trends that tell us what is good for us. Remember a couple of years ago when the health buzz word was cruciferous vegetables? And while we might love our broccoli, cauliflower, cabbage and Brussels sprouts, there was no glamour there, no pizzazz. You just couldn’t make them look cute.

Lately the trend has been toward antioxidants, and imagine this: they are found in things that are delicious: blueberries are among the hot and trendy health foods now.

Well, heaven knows I want us all to be healthy. I’ve recently made this dessert several times. One friend, subjected to it at a couple of different dinners, said he could eat it every night. You may not go that far, but it is extremely easy and quite tasty.

“Panna cotta” is Italian for “cooked cream.” It probably originated in the north of Italy, where cream is used in cooking more than in other regions. But now it’s fairly common all over. Usually served with fruit, or sometimes with a caramel or chocolate sauce, it is quickly made.

The wine for this should be something fairly light, but it should be fruity and of good quality. I used an inexpensive sangiovese (the grape of Chianti) from California. You can reduce the wine in advance. Then bring it back up to a simmer and add the blueberries an hour or two before serving.

If any of the blueberry sauce is left over, crush the blueberries in it and simmer for a few minutes. Cool and use it over pancakes or ice cream another time. You could even put it over your morning oatmeal or cream of wheat. It is a health food, you know!

Bring the wine, sugar and rosemary to a simmer in a non-reactive saucepan. Simmer uncovered until reduced by slightly more than half. Remove from the heat and add the blueberries. Set aside, covered, at room temperature for up to three hours.

Put the water in a wide flat bowl, like a soup plate. Sprinkle gelatin over the top and let set for at least five minutes. There should be no dry spots. If there are, sprinkle a few drops of water over the top to moisten completely.

In a medium saucepan, bring the heavy cream to a simmer. Add the sugar, salt and vanilla. Stir until the sugar has dissolved. Remove from the heat and add the gelatin. Whisk until all the gelatin has dissolved. Let cool slightly, then add the crème fraiche or sour cream. Pour into individual serving dishes. Clear glass tumblers or wine glasses look particularly nice. Cover and refrigerate until set, at least four hours and up to 24 hours.

When ready to serve, remove the rosemary sprigs from the room temperature blueberries. Spoon over the panna cotta and garnish with additional fresh rosemary sprigs. Serves 6 to 8.

I subscribe to the newsletter from "Cheeses of France," a very interesting and informative website. With suggestions for cheese plating for various occasions, detailed information about each cheese, and an interactive map that helps you pinpoint where each of the more common cheeses originate. And you can subscribe to their newsletter as well.

There are also lots of links to other websites dealing with cheese, so you can while away several hours cheese-web surfing if you're not careful. (Does that sound like the voice of experience?
Posted by Alyce at 3:37 PM No comments: 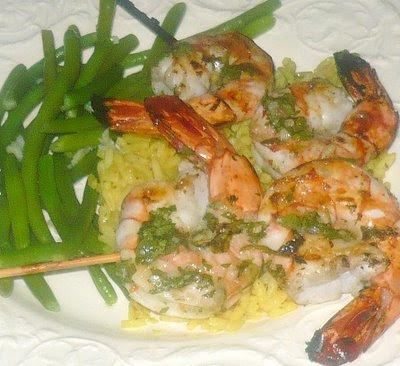 Recently I was asked to do a private cooking class on grilling out. I came up with a full four-course menu of grillable recipes. I knew I wanted to use shrimp but I wanted it to be a little different from the usual lemon-garlic-olive oil marinade, as good as that might be.

I was wandering around the supermarket one afternoon and found something wonderful in the produce department. There were tubes of seasoning pastes in various flavors, but the one that appealed to me was the lemongrass.

I like the flavor of lemongrass, widely used in Thai, Vietnamese and other oriental cooking. It has a pungent lemon flavor that blends well with the other elements of those cuisines: garlic, cilantro and hot chiles. But it can be a little tough and fibrous if not prepared correctly. So when I saw the tube of lemongrass paste I grabbed it and went home to play.

This was served at the cooking class as an appetizer, but more recently I served it as a main course for a group of friends. I like to use the larger size shrimp (16-20 to a pound) for this so that it can be marinated a bit longer. Don’t let it set too long in the marinade, though, or it will get a little mushy from the acid in the vinegar.

If you’re using wooden skewers, be sure to soak them at least an hour in warm water so they don’t catch on fire if you are doing these on the grill.

I served it with Zatarain’s Caribbean Rice from the supermarket, which has pineapple in it. The slight sweetness was the perfect accompaniment to the shrimp. Add some fresh green beans, cooked until just crisp-tender and tossed in garlic butter, and you have a wonderful meal.

Place the shrimp in a bowl. Mix remaining ingredients. Reserve a couple of tablespoons of the mixture and pour the rest over the shrimp. Marinate, chilled, for no more than an hour. Thread the shrimp on the skewers and grill for about two minutes per side. Drizzle with the reserved marinade and serve immediately. Serves 8 as an hors-d’oeuvre or 4 as a main course.

NOTE: This can also be done on a cast-iron griddle or heavy skillet on top of the stove, or under your oven broiler.
Posted by Alyce at 1:29 PM No comments:

Side Dishes for Oriental Pulled Pork 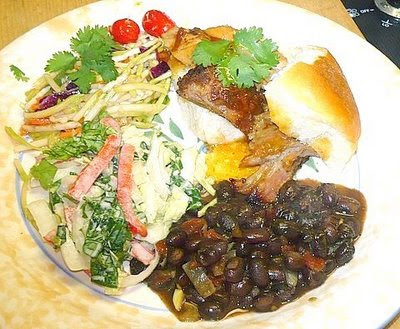 In today's Home and Garden Section of the Commercial Appeal, I published a recipe for an oriental style pulled pork sandwich. The side dishes I served with it came from prior columns. For those who don't cut out and save every column (and why not, I want to know!) here are the recipes.

For the two cole slaw variations I started with the Georges Bank salad dressing. I made it as published, except I used lime zest and juice instead of the lemon juice. I mixed it with packaged broccoli slaw (available in the produce section of markets). I also mixed it with an equal amount of mayonnaise for a slaw made with a small head of Chinese cabbage and a small head of bok choy, thinly sliced. I added a bit of slivered onion for flavor, and a slivered red bell pepper for color. You could quite handily substitute packaged cole slaw mix for the cabbage and bok choy. Both were liked equally by my guests, but I preferred the mayonnaise version.

Preheat the oven to 350. Heat the oil in a large pot. Add garlic and stir a couple of times. Add onion and cook until translucent. Add remaining ingredients except beans and salt. Bring to a simmer and cook for 5 minutes. Add beans, stir to combine and place in a casserole. and bake for about an hour. Serves 8-10.
Posted by Alyce at 11:49 AM 1 comment: 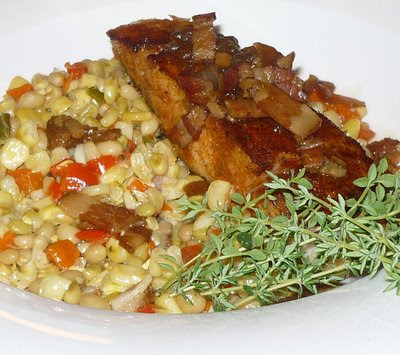 It started with leftover corn on the cob. We'd been part of a pot-luck cook-out and I'd made it the way I always do nowadays. I mixed the juice and finely grated zest of a lime into a stick of room temperature butter, slathered it on the shucked corn and wrapped it in foil. It takes about 20 minutes to cook on a hot grill, turning often, or in a 400-degree oven, on a baking sheet. Try it, and you'll never boil corn on the cob again.

I had four ears left over. I was going to my friends' house, Laretha and Bryce Randolph, to cook together and thought I'd like to try a version of a dish I'd read about in a restaurant trade magazine. At the farmers' market I picked up some lady peas and red bell peppers and we were set to go.
I used a spice rub Laretha had made for the fish, and a succotash to go under it. A bacon sauce on top made it what all at the table pronounced one of the best dishes we'd ever cooked together.

I know it looks long, but trust me, it's well worth it. I used golden tilefish, similar in taste and texture to the sadly overfished and expensive Chilean sea bass, but halibut or grouper would work well. You can made the rub any time, and you'll probably find lots of other things to use it on. You can make the succotash and bacon sauce earlier in the day and reheat at serving time. Then all you would have to do is sear the fish and you're good to go.

FISH WITH SUCCOTASH AND BACON SAUCE

Combine all the ingredients for the rub. Keep in an airtight jar at room temperature.

In a skillet, cook the bacon for the sauce until lightly browned. Remove with a slotted spoon and reserve. In the remaining fat, cook the onion and garlic until tender. Add the molasses and cook, stirring for a couple of minutes. Add the wine and cook until almost evaporated. Add the chicken stock and simmer briefly. Add the bacon and set aside.

Cook the lady peas with the minced bacon in water to barely cover, for about 20 minutes or until just tender. In a skillet over medium heat cook the bell pepper, onion and carrot until tender. Add the corn and stir to combine. Add the lady peas with their cooking liquid and the thyme. Simmer until the liquid is reduced slightly. Add the cream and simmer briefly. Taste and season with salt and pepper as desired.

Sprinkle the rub over the fish. In a heavy skillet over medium-high heat, heat the oil and cook the fish until well-browned and just barely done.
Serve the fish on a bed of succotash. Drizzle the sauce with the bacon over the top and serve immediately. Serves six.

NOTE: One jalapeño pepper with the seeds removed will give a nice zing. Leaving the seeds in makes the dish hotter. Use your own taste in hotness as a guide.
Posted by Alyce at 11:11 AM 1 comment: 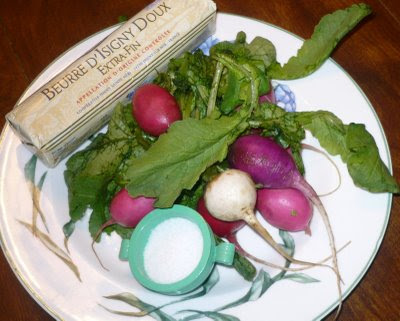 I stopped in Fresh Market the other day for one of those "Berry Mascarpone Coffee Cake" things that I really like, and on the way through the produce department, found these "Easter Egg Radishes." Aren't they pretty?

I had to have them, and took them home to share with a friend. In the classic French style of serving, I had some crusty bread, excellent French butter and a little pot of sea salt. What a nice little mini-feast it was!
Posted by Alyce at 11:06 AM No comments:

What a treat! To have one of Mantia's favorite recipes featured in the September issue of Memphis Magazine! 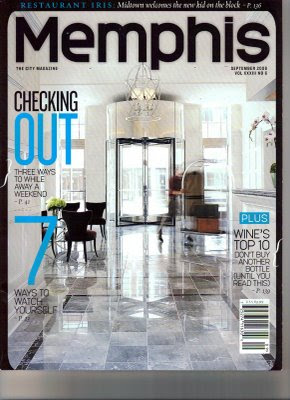 Now I'm pretty sure you can't read the recipe from this page but the photographer took almost an hour to shoot the final plated dish, and what a lovely job he did. So I wanted to show it off. You'll find the recipe below. 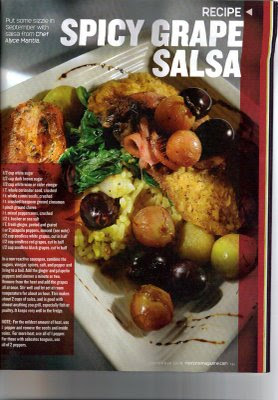 In a non-reactive saucepan, combine the sugars, spices and salt and bring to a boil. Add the ginger and jalapeño peppers and simmer a minute or two. Remove from the heat, and add the grapes at once. Stir well and let set at room temperature for about an hour. This makes about 2 cups of salsa and is good with almost anything you grill, especially fish or poultry. It keeps very well in the fridge.

NOTE: For the mildest amount of heat, use one pepper and remove the seeds and inside veins. For or heat use all of one pepper. For those with asbestos tongues, use all of two peppers.
Posted by Alyce at 12:55 PM 1 comment: