Should we send him to the Bluebird Cafe?

I have, on many occasions in the past, recommended posts from Adam Roberts, who is often insightful and always hugely amusing. You MUST hear the clever song he devised when a waiter took his plate away way before he'd finished it.  He claims it's a country-western song.  Well, remember, he IS a yankee.  God love him anyway, okay? You can find it here on his blog.
Posted by Alyce at 12:40 AM No comments:

I'm never going to be a total vegetarian, but...

Take a look at this blog. It's a regular part of Huffington Post. It gives a very interesting view of a foodie who pledged to be a vegetarian for just a month, and what she learned, both for herself and how her family reacted to it.  I think I could probably be a "flexitarian." A diet of mostly vegetables and grains wouldn't bother me at all. Well, except sometimes I really need a burger. Or chicken. And my husband doesn't consider a meal complete without some sort of animal protein. (His comment on Cochon 555: "oysters, pork, pork, pork pork and pork: the perfect six course dinner").

I would love to hear from you about your views of any part of what she went through!
Posted by Alyce at 11:30 PM No comments:

On the Zagat website, there's a slide show of what a group of chefs consider their best meal ever: Best Meal Ever: An Epic Look At Favorite Meals.  I think you'll find it an amusing way to pass a few minutes. Of course I had to click on all the links to the restaurants cited, and then look at the menus of each.  It took me an hour to get through them all!
Posted by Alyce at 9:36 PM No comments: 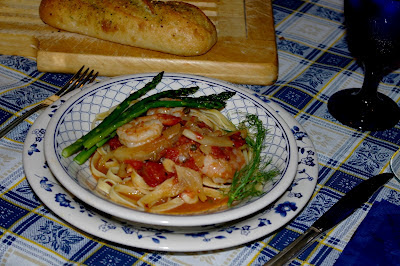 Last week I had friends in for a very casual dinner. I had shrimp in the freezer. This was a small group.  Shrimp isn’t something I often think of for big crowds, partly because it’s a little costly. And partly because it’s hard to find a good shrimp recipe that doesn’t take a lot of last minute work. And I just don't like a lot of last minute work when I'm entertaining a large group of guests.

But for a smaller group, I love to make some sort of shrimp pasta, and I’ve got a new one for you. You can make the sauce completely (up to adding the shrimp) an hour or two ahead and let it set at room temperature. You can also make it even further ahead and refrigerate, bringing it to a simmer before adding the shrimp.

This is quite typical of Sicilian cooking. Citrus grows wild on the island, and capers and raisins are often used with tomatoes there. Marsala wine is native to Sicily. The sauce is thinner than a typical Italian tomato sauce. That’s how it’s supposed to be.

You may wonder about the lack of cheese. Italians rarely use cheese with seafood pasta dishes, but if you want it, I won’t tell on you!

With a simple salad, this makes a great meal to share with friends on a winter evening.

In a large heavy skillet, heat the olive oil over medium heat. Add the garlic and stir a couple of times. Add the onion and cook, stirring occasionally, about 2 minutes.

Cut the top stalks off the bulb of fennel. Cut the bulb in half vertically. Cut out and discard the solid core. Sliver the remaining fennel bulb and reserve the top green fronds for garnish. Add the fennel slivers to the pan with the onions. Stir and continue to cook about another five minutes.

When ready to serve, bring the sauce to a simmer and add the shrimp. Cook, stirring frequently, until the shrimp are pink and opaque, about 5 minutes. Serve over the pasta and garnish with the reserved fennel fronds. Serves 6 to 8.

NOTE: The red pepper flakes give a little zing without being too hot. You may increase them if you like, or leave them out entirely if you prefer a milder dish. 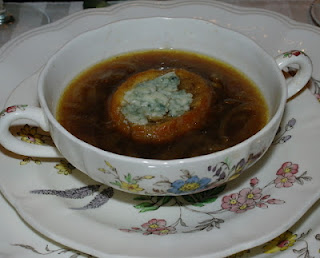 When I entertain, I always like to have a first course to start the meal. In the summer, it’s almost always a salad of some sort, since there is so much great produce available. But in the winter, I like soup.
A first course soup can’t be too hearty or you’ll spoil your guests’ appetite for the rest of the meal. I’ve always loved French onion soup, but that is indeed a meal in itself. This onion soup is a great alternative.
It takes a while to cook the onions for this soup, but the entire recipe can be made ahead and reheated at serving time. You don’t want the onions deeply caramelized, as for French onion soup; just a nice golden brown is perfect.
You can use store-bought crostini toasts for this recipe, but I find it easy enough to make my own, and I like the way the home-made ones absorb the soup.
For the blue cheese, get a mild one that will get soft and creamy at room temperature. Gorgonzola works well, as do the soft ripened ones like Saga or Cambozola. Stronger flavored blues, such as Roquefort or stilton, would overpower the taste of the soup.
This soup would go well before almost any main course that doesn’t have a lot of onion in it. In larger servings, with extra blue cheese toasts, it would also make a very nice luncheon. For a less formal presentation—a Super Bowl party maybe?—you might puree the soup with a hand blender and serve it in mugs with the toasts on the side.
However you do it, I’m sure your guests will love it as much as mine did!

In a heavy pan, cook the onions in the olive oil over medium-low heat, stirring occasionally, until golden brown. This will take 30-45 minutes. Stir in the cider, thyme, broth, water and brandy. Simmer uncovered for 20 minutes. Add salt and pepper to taste.
Ladle the soup into soup bowls and float blue cheese croutons on top. Serve immediately. Serves 6 to 8 as a first course soup.

Preheat the broiler. Put the bread slices on a baking sheet and toast lightly under the broiler. Spread the blue cheese on the toast. When ready to serve, run under the broiler just until the cheese is beginning to bubble and get a bit browned on top.
Posted by Alyce at 8:51 PM No comments: