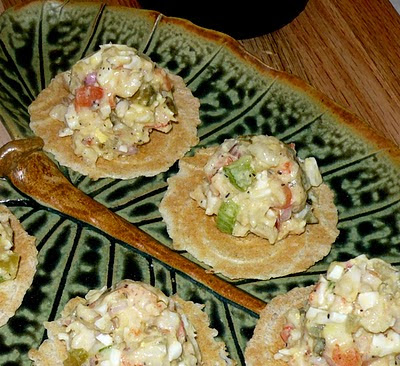 If you’re a loyal reader of this blog you may remember a couple of recipes I’ve gleaned from the files of my dear friends Lewis and Carolynn Clark. One of the most popular was the gumbo recipe from Lewis’ mother a couple of years ago.

We were invited to a post-holiday gathering at their home and one of the appetizers was the best shrimp salad I’ve ever had. Carolynn said it was a Clark family favorite, but with a little cajoling, I got the recipe. If you’re a shrimp lover, I predict this will be one of your favorites.

In a Dutch oven, bring enough water to boil to cover the shrimp. Add the Old Bay seasoning. Drop in the shrimp and cook for 3 to 5 minutes (depending on the size) until just cooked through. Drain and let cool. Peel the shrimp and put into a food processor. Pulse two or three times. (Or chop finely by hand.)

In a large bowl, mash the egg yolks with the mayonnaise. Dice the egg whites and add with the shrimp and remaining ingredients and mix well. Add more mayonnaise if you like a looser shrimp salad. Cover and chill well.

For an appetizer, serve in tablespoons on crisp crackers or endive leaves. For a lovely luncheon dish or first course salad, serve scoops on a bed of lettuce, garnished with tomato slices and lemon wedges.  Makes appetizers for about 10, or salads for 6 to 8.

NOTE: With a considerable sacrifice of flavor you could use frozen pre-cooked shrimp. However, many supermarket seafood departments will steam shrimp for you now, in the seasoning of your choice. This would make this a really quick fix!
Posted by Alyce at 9:30 PM 3 comments: 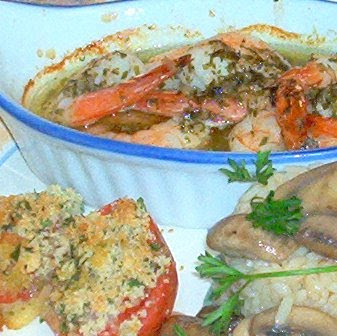 My sister is a hopeless addict to garage sales. A few weeks ago we were both at home in Louisville at the same time, and she convinced me to go along with her to several. At one of them, there was a stack of old menus. Among them was one from the Fig Tree Restaurant, one of my favorite places to eat in the 70's in Louisville. Long gone now, it was an early innovator in both menu style and individual dishes. It had a set menu that changed each night. You could substitute a steak for the main course, but otherwise, you got what they were serving that night. Knowing what I know now about the food business, it was an incredibly ambitious undertaking.

One of my favorite dishes at the Fig Tree was a shrimp dish. I don't recall their name for it, and it wasn't on the menu I brought home, but I've made my version of this many times over the years. Recently I made it again for friends, who all pronounced it a worthy recipe to share with you.

The reduction is similar to that for béarnaise sauce, and includes chervil. This isn't the most common of herbs. In my opinion, it is under-rated and under-used. It makes a good addition to salad dressings, and is particularly nice in almost any potato salad recipe. Added to butter with lemon, it can be drizzled over grilled fish or chicken.

A suggestion: for herbs and spices you're not sure you're going to want to use over and over, go to Penzey's, on Poplar near Kirby Parkway. They sell almost everything in small packages. If you don't have chervil, you can leave it out of this recipe and it will still be very good.

I make it in individual baking dishes, but you can just as easily make it in one shallow casserole. I like to serve it on a bed of rice with mushrooms, with tomatoes topped with garlic breadcrumbs and baked. If you serve it with rice, you might want to double the sauce ingredients so you will have some to pass at the table.

Combine all the "to start" ingredients in a small saucepan and simmer until reduced by about half. In another pan, melt the butter with the clove of garlic in it. Remove the smashed garlic clove and add the wine reduction.

Preheat the oven to 350. Place the shrimp in one layer in a shallow baking dish. Pour the butter-herb mixture over the top and bake for 15 to 20 minutes, or until the shrimp is just done.
Posted by Alyce at 9:27 PM 2 comments: 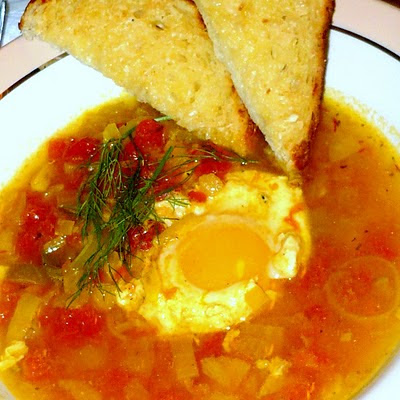 When someone says "bouillabaisse," what come to most folks’ minds is the traditional fish soup of Marseilles with lots of fish and shellfish involved. But in traditional Provençal (Southern French) cooking, there are several varieties: eel, cod, snail, even chicken, or as in today’s recipe, poached egg.

This is a delicious, fast, easy and economical recipe. This is often known as "poor man’s bouillabaisse." According to Cuisine et Vins de France, a French culinary magazine, it is also known familiarly as "one-eyed bouillabaisse."

You shouldn’t be afraid of poaching the eggs in the soup as long as they are very fresh and you've kept the liquid to a bare simmer. If you are, use oven-proof bowls, put the hot soup in them on a baking sheet. Heat in a 350-degree oven for about 15 minutes, or until the soup has tiny bubbles around the edges. Break the eggs in the soup and by the time you get it to the table, the eggs will be poached to a soft-yolk stage. If you like your egg yolks firm, just leave the bowls in the oven until they’re done to your liking.

In the summer, you would use red-ripe tomatoes, peeled, seeded and diced. But this time of year, I use a can of diced tomatoes, well drained, for an excellent result. Keep the juices and add to another soup or to pasta sauce

You can make the soup ahead of time and reheat before adding the eggs, so it would be a perfect dish for a winter brunch or supper.

Cut off the upper dark green leaves of the leeks and discard. Cut the bulb (including the light green) in half lengthwise, then slice about ¼" thick. (Or peel and dice the onion). Cook with the garlic in the olive oil, in a heavy Dutch oven over medium heat, about 5 minutes. Add the fennel and cook until the onion is soft and translucent, but not browned.
Add the tomatoes, stock, saffron, potatoes, and orange zest and juice. Simmer about 15 minutes, or until the potatoes are done. Reduce the heat so the soup is just barely simmering. One by one, break an egg into a cup and slide into the soup. Cook another 4-5 minutes, or until yolks are done to your liking. Serve immediately, garnished with some of the fennel fronda. Serves 6.
Posted by Alyce at 10:16 PM No comments: