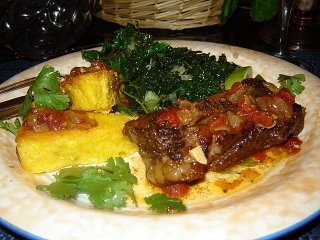 As I promised, I am attempting to address some of the e-mails sent to me with suggestions and requests for recipes.

One Loyal Reader asked about beef short ribs. They are quite the thing now, and you can get them in the very finest restaurants at a price that might belie their reasonable cost. What makes them more costly in a restaurant situation is the loving care that they need. The Loyal Reader had been to a small place in the southwest and gave me only a few hints about the dish he had enjoyed so much.

One of the things he said was that it had "mild heat" and a "sort of smoky flavor." That said "chipotle pepper" to me--that’s a jalapeño pepper, dried, then smoked. It is available either in bags, dried, or in cans with adobo, a sort of spicy tomato sauce. It gives food a nice zing, but is not tongue-burning, head-sweating hot.

And now to a confession: I had never cooked short ribs. So I took myself off to Charlie’s Meat Market and chatted with my butcher friend Chuck. He suggested that I use ribs cut across the bone, in 1" to 1-1/2" width. I took them home and proceeded to put together a spice mixture that I thought might go with the chipotle flavor. I rubbed it all over the ribs and put them in the fridge. At the grocery store, what did I find but Chipotle Tobasco Sauce. Well, I needed to try that, didn’t I?

I wasn’t happy with the first try. To begin with, I thought I wanted longer bones in the ribs, so they didn’t fall apart in the cooking process. And then, I thought the spice mixture was not as lively as I might have liked.

So back to Chuck I went, and had the ribs cut crosswise into wider 2" strips. I added layers of flavor to the spice rub, and picked up the taste a lot with lime juice and zest.

To go with the ribs and their savory juices, I cooked up some Delta Grind stoneground grits, adding shredded cheddar cheese and a small can of chopped green chiles. Then I poured them into a loaf pan and let them chill. Sliced, brushed with some of the fat from the ribs and run under a hot broiler, they made an excellent complement. For a green veggie, I sautéed a handful of minced onion in a film of the fat from the ribs, added a bit of chicken stock and steamed kale in it. I love kale.

I don’t know if this is exactly what my Loyal Reader had in mind, but I sure did like it! The one thing I would counsel: if you have time, rub down the ribs a day ahead of cooking, and cook a day ahead of eating. The ribs must be slow-braised for the best flavor and texture, but they give off a lot of fat. If you can chill them overnight after fully cooking them, you can scrape off almost all the fat.

Otherwise, before serving, pour off the cooking juices into a measuring cup and skim off as much fat as you can with a ladle. You can do what you want with the fat, but I can tell you that it makes a mean fried egg for breakfast the next morning as you are cleaning up the last of the dishes!

Any leftover beef can be taken off the ribs, mixed with the cooking juices and used as a pasta or rice sauce. I had some left, but not enough for another meal. I put them in the freezer and used them later to stuff wonton wrappers, ravioli style. Cooked and tossed with olive oil and grated Pecarino Romano cheese, they were quite tasty.

Because I thought they were so good, I made another batch for a different batch of friends. I had about one generous serving left over. I simmered it in more stock, added another can of tomatoes and made a good soup. I served it with a yellow rice pilaf timbale in the center of the bowl. Also YUMMY!

Mix the rub ingredients in a small bowl. Sprinkle generously on all sides of the short ribs and massage it in gently. Set aside at room temperature for a couple of hours, or refrigerate overnight.

Preheat the oven to 350F. Cut the rib strips into two long pieces. Heat the oil in a large heavy skillet over medium-high heat. Add the ribs in batches, without crowding, and brown well on all sides. As they brown, transfer them, meaty side down, to a baking dish with a lid that will hold all the ribs in one layer.

Reduce the heat to medium-low. Add the garlic and stir a couple of times. Add the onion, cover and cook until the onion is soft and golden, stirring occasionally. Add the broth and bring to a boil, stirring with a wooden spoon to scrape up any browned bits. Add the tomatoes with their juice, the lime juice and zest and the Chipotle Tobasco Sauce. Bring to a boil and pour over the ribs. Cover and bake until the ribs are tender, about two hours.

Remove the lid of the baking dish and with tongs, turn the meaty side up. Continue to bake until the ribs are fork-tender, another half-hour or so. Remove the ribs to a serving platter and drizzle with some of the cooking juices. Arrange the lime wedges around the edge of the platter and sprinkle generously with chopped cilantro. Pass the remaining gravy at the table. Serves 6 to 8.
Posted by Alyce at 1:24 PM No comments: 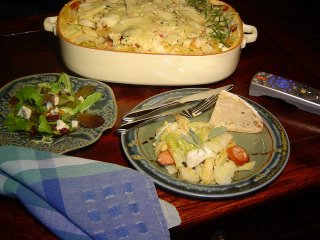 June was in the shower when the tree cut the house in half, and George was just getting ready to leave for work. The result of “Hurricane Elvis” that struck in the summer of 2003 turned out, for the Owens’, to be almost a blessing.
The kitchen, pre-storm, had been a galley type kitchen, with barely room for two people to pass, much less cook together. Now when you walk into their renovated home, there is no doubt what goes on in that area: cooking, eating, and plenty of it!

George, having taken the early-retirement offer from Fedex, had the time to do a lot of the finish work himself, allowing for wonderful results with the money they received from their insurance. They pushed the back wall out to include the former patio, and knocked out the wall between the kitchen and former dining room. The result is something they call a “keeping room.” The first thing that strikes your eye is the 16-foot long granite topped island, with five-burner cook-top, dishwasher, big double sink and trash compactor. Plenty of drawers and cabinets underneath hold almost everything needed to cook close at hand.

Another counter, which held the cooktop in its former life, now boasts a marble top for June to use when making the breads and pastries for which her friends are very appreciative.

At the far end is a large homey, inviting seating area, with a big-screen TV, and overstuffed chairs and a sofa that seem to just envelope you when you sit. You might never want to get up.
But you will, because on the far side of the island from the cooking area are a row of comfy stools that encourage you to watch as June works her magic on the evening’s dinner.

This weekend George and June Owens invited a group of friends to watch the Super Bowl. As we were gathering, June served a variation on the chip-dip theme: toasted pita wedges with store-bought hummus. The platter was strewn with an assortment of olives, peperoncini and cherry tomatoes.

When it came time for dinner, June brought out a rustic casserole of pasta, sausage, potatoes, cabbage and cheese. I loved it! Her recipe was written in general terms on a tattered recipe card, but I convinced her to give me measurements so you can make it, too. She got the recipe from an Italian friend who lives in Rome, but the combination of ingredients bring to mind the cooking of northeast Italy.

A green salad with dried cherries, goat cheese crumbles and a vinaigrette made of 1/4 cup tequila-lime vinegar (available at gourmet markets), a couple of tablespoons of Dijon mustard, and 3/4 cup olive oil made a wonderful accompaniment. A loaf of her excellent bread went well, too.

Dessert was a purchased rum-cake topped with dollops of clotted cream. Whipped cream would be an excellent alternate. Invite a few friends and try it all. You’ll all be so happy you might not even care if your team loses!

Preheat oven to 350. Sauté sausage in heavy skillet over medium heat until lightly browned and set aside. Toss the potatoes with 2 tablespoons olive oil and the rosemary on a baking sheet and roast for 20 minutes. Sprinkle lightly with salt.

Melt the butter in a skillet over medium-low heat, add the garlic and sage and cook 2-3 minutes, stirring a couple of times. Pour over the hot, cooked and drained pasta and toss well.

Now, in a large buttered casserole, layer the ingredients in this order: pasta, potatoes, cabbage, cheeses and sausages. Make at least two layers of each, three if you casserole is deep enough. Salt and pepper each layer to taste. Cover with foil and bake for 20-25 minutes, until heated through. Remove foil and bake another 5 minutes or so, until cheese is melted and lightly browned. Serves 8-10.

NOTE: This looks like a lot of work, but it’s not, and can be done ahead and refrigerated. Remove from the refrigerator about an hour before baking.
Posted by Alyce at 1:16 PM No comments: