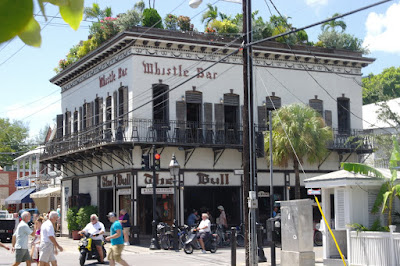 We've returned from our Great Southern Road Trip vacation. And I know I owe you lots of updates on amusing places we saw, and reviews of places we ate. Remember, patience is a virtue.

This was a bar we saw in Key West. The bar area on top, where you see the trees and garden area, is "clothing optional."

We didn't go there. But we did take a trolley tour of the town and the guide suggested that if you plan to go up there, you have a few drinks in the second floor bar first, and sort of watch to see who's going up before you pay the cover charge! 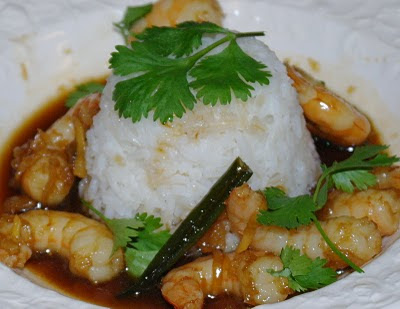 Once a month Williams-Sonoma has a Saturday cooking demonstration, free of charge. I go as often as I can, because the recipes are always really tasty.
A few weeks ago I went and the recipe was from Sous Chef Justine Kelly, of the restaurant Slanted Door in San Francisco. She called it "Caramelized Shrimp with Lemongrass, Thai Chiles and Ginger."
I had friends coming for dinner that evening and I really wanted to make it, but it called for several ingredients usually only available in Oriental markets: fresh lemongrass, palm sugar and Thai chiles. There is no oriental market near us, so I figured I’d adapt it to supermarket shelves. It came out so well that I thought you’d want to try it too.
For the palm sugar, I substituted dark brown sugar, and frankly I’m not sure the end result wasn’t better for it. I made the caramel syrup with the fish sauce, as indicated, but the recipe called for making a lot more than needed with the note that it keeps well for other uses. I just made enough for the one recipe.  But I'm going to try this same recipe soon with chicken breasts, cut into chunks and cooked exactly the same way, so leftover syrup wouldn't have been a bad thing.
Lemongrass paste is widely available in tubes, in the produce section of your market, usually near the fresh herbs. It works extremely well in recipes such as this, and keeps well in the fridge.  It has the added advantage of not having to deal with the tough parts of the lemongrass that won't get tender no matter how long you cook the dish.
And since there were no Thai chiles, I used a Serrano chile instead. Our friends are much more heat tolerant than I am, so I sliced up another for them to add to the finished dish as taste dictated. A jalapeño pepper would also work.
And finally, although the recipe didn’t call for it, I topped it with chopped cilantro, which all agreed was a felicitous addition.
I served it with steamed white rice, roasted asparagus and Mark Bittman’s salad of heirloom tomatoes, soy sauce and a drizzle of oriental sesame oil, atop a bed of arugula.
This makes a good dinner for a busy day, because you could probably get the rest of the meal done in about the time it takes the rice to cook. Alternately, you could (as I did) prepare the recipe up to the point where you add the hot caramel sauce. It takes only about 5 minutes then, to finish up.
Vietnamese Caramelized Shrimp
1 ½ lbs large shrimp, peeled and deveined
1 tsp. coarsely ground black pepper
2/3 cup dark brown sugar
1/2 cup oriental fish sauce
3 tbsp. vegetable oil
1/2 cup shallot, peeled and very thinly sliced
1 or 2 hot green chiles, cut lengthwise in half, seeds removed
3 tbsp. lemongrass paste (or ¼ cup fresh, minced)
2 plump cloves garlic, thinly sliced
1 2-inch cube fresh ginger, peeled and cut into thin matchstick pieces
¼ cup chicken or seafood stock
½ cup cilantro, chopped
Rinse the shrimp, pat dry and sprinkle with the pepper.
Make the caramel sauce: in a heavy saucepan, simmer the brown sugar with the fish sauce just until the sugar is melted. Keep warm.
In a large heavy skillet, heat the oil over medium heat. Add the shallots and chiles and stir a few times. Add the lemongrass paste, garlic and ginger. Cook, stirring for another couple of minutes. Stir in the chicken stock and hot caramel sauce.
Add the shrimp, turn the heat up a little and cook, stirring occasionally, until the shrimp are just done, five to seven minutes. Transfer to a serving bowl, sprinkle with the cilantro and serve immediately. Serves 6.

A tasty fish with an interesting background.

As you may or may not know, we are nearing the end of The Great Southern Road Trip. I haven’t been a very good girl about documenting things you might have found interesting because this has been a very laid back trip I mean, hey, we’re in the South, right?

Now we’re in the Floriday Keys. Tom thinks he wants to retire tomorrow and move here, but I’m pretty sure that some of the beer he drank in the water-front bar whilst watching a lot of football today may have fogged his mind a bit.

Anyway, we took a tour out to Pigeon Key yesterday. It is on the former railroad line paid for by a Mr Flagler. There’s some interesting history there, connected with the Bingham family, newspaper high mucky-mucks in Louisville, my home town, but that will be for another day.

It was a work camp for a while and housed several hundred men tricked into coming down to lower Florida to work on the railroad bridge. There’s a lot of very interesting history and you can find some of it here.

While we were there, we were shown an aquarium with a few small but really beautiful fish. They were immature lionfish. We were told that they were introduced in the the local waters, probably by folks who’d brought them from their native Indo-Pacific home as aquarium fish. 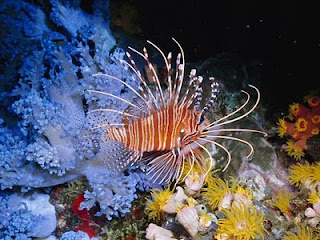 They are voracious eaters and have no predators, so they’ve spread, much to the detriment of native fish. And while they are indeed beautiful, they have spines that carry a toxin that can be very painful if touched.

Now you probably are wondering why I’m telling you all this, especially when I’ve been remarkably lazy about telling you about earlier culinary wonders of the trip but the reason is that I had lionfish for dinner tonight, at Lazy Day Restaurant in Islamorda, The Keys, Florida.  What better way to get rid of an invasive critter but to eat it, right?

It was a very mild flavored fish, which made it perfect for the almond crust and key lime butter sauce with diced tomato and sliced scallions.  Really yummy! 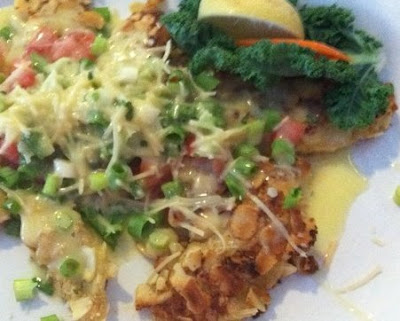 In the interest of fair reporting, Tom had the whole Florida lobster Mediterranean, with capers, diced tomato and lots of other goodies, as you can see  for yourself. 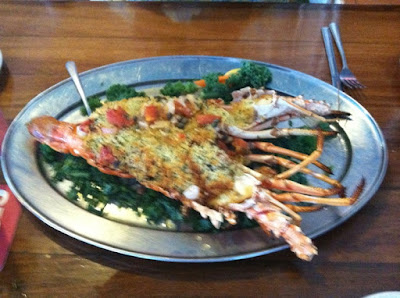 I promise to make time to fill you in on some of the other culinary delights of our trip.  Tomorrow.  Or the next day.  Or sometime next week.  It’s amazing what being down in the Keys does to one’s sense of urgency.

A Summer Salad for your Labor Day Cookout! 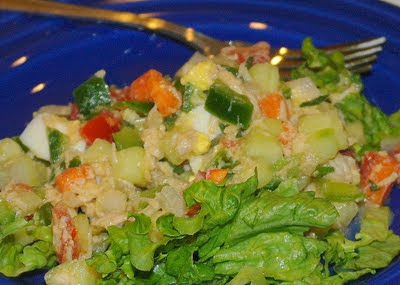 If you read my blog regularly, you know that I’m in a wine dinner group that meets monthly. The host picks the theme and makes the main course and each guest couple signs up for a different course along the same theme.
Everyone in the group loves to cook and does it well so we have some stellar dinners. Recently it was our turn to host, and I picked Spain as our wine region.

Once again, every single course was exceptional. This is the last of the ones I wanted to share with you. Jeanene Lawhead Feinstone brought a most delicious salad called "pipirrana."

Pipirrana is a vegetable salad that is found pretty much everywhere in Spain, with regional variations. Some add diced cooked potatoes, others diced avocado or lightly steamed carrot. Although Jeanene used green bell pepper, you can use red, or a mixture of red and green. In the Basque region, the peppers are often sautéed in olive oil with the onion and cooled before adding the remaining ingredients. I’ve had it with sherry wine vinegar in the dressing, and once I’m pretty sure there was a touch of honey in the vinaigrette.

Jeanene suggests that you add the dressing a little at a time. You want it to coat all the vegetables, but not to have a big pool of it in the bottom of the bowl.

However you do it, since there is no mayonnaise, it would make a perfect picnic food or side dish for your Labor Day cook-out. And for another variation, I stuffed the last bit of Jeanene’s salad into a pita half with sliced tomato and hummus and it made a great lunch. I might do that for the next Botanic Garden concert!

Dice all the ingredients finely into ½ in. cubes and toss with blended olive oil and vinegar. Salt to taste.
Chill for at least one hour before serving. Spoon on bed of chopped green leaf lettuce. Serves 8 generously.