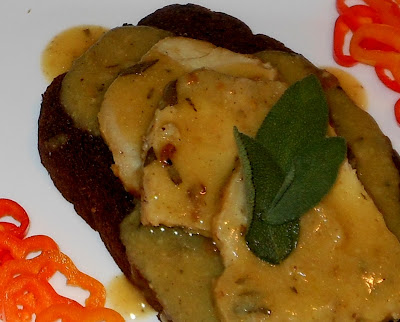 Recently a friend asked me to help with a luncheon for her language students.  She wanted one French, one Italian, one Spanish and one German dish.  I had plenty of the first three languages but came up short on the German. It’s just not part of my repertoire.


I had eaten, a while back, in a German-style restaurant in St. Louis and had a pork roast with mustard sauce. But I couldn’t find anything quite the same in my research.  So I did as I thought it had been done, and it turned out to be quite tasty. So tasty, in fact, that I made it again a few days later for friends.


I used a pork loin roast, but you could quite easily substitute pork tenderloin.  If you don’t care for pork, this sauce would be equally delicious on chicken breasts.


I sliced it and served it open face style on dark pumpernickel bread.  The bread was a perfect accompaniment to the flavors in the pork and sauce.  Add roasted or mashed potatoes and a green vegetable and you have a great meal for your dinner guests.


Preheat the oven to 375o.  Mix the olive oil and 2 tbsp. mustard and rub over the pork roast. Sprinkle generously with salt and pepper.  Put in a heavy skillet or roasting pan. Place in the oven and roast until a meat thermometer reads 145o, about 20 minutes per pound.  Remove the pan from the oven, place the meat on a platter and tent with foil.


Place the pan on the stove over medium heat. Add the wine and chicken stock and stir to dissolve any browned bits in the skillet.  Mix the butter, flour and remaining 2 tbsp. mustard together. Whisk into the pan. Simmer until thickened, then whisk in the sage. Simmer a couple of minutes.


Slice the pork and arrange it on top of the bread slices.  Serve with the sauce drizzled on top.  Serves 6 to 8.
Posted by Alyce at 1:31 PM 2 comments: