Great apps for your holiday grill! I recently hosted a five-course Tuscan dinner which had been bid on at our annual church school auction.  One of the hits of the evening was a smoked salmon bruschetta, served as an antipasto course. (By the way, the word is pronounced “broo-sketta.”)
I used red onion marmalade that I had made earlier.  Once you make this, you will find lots of uses for it. It’s delicious on almost any grilled meat.  Layer it with cheddar cheese to make a yummy grilled cheese sandwich.  Serve with shrimp instead of cocktail sauce. It will become a staple.
I grilled the bread for the bruschetta and it occurs to me that it would make a good beginning for your July 4 cookout.  You can grill the bread before the ribs or burgers go on the grill, and it’s a quick job to assemble them once you’ve done that.  You could also use purchased crostini or baguette toasts for a smaller version.
I hope your guests will enjoy it as much as mine seemed to.

To make the marmalade, in a heavy medium saucepan, heat the olive oil over medium heat.  Add the onion and garlic and cook, stirring occasionally, until the onion is very soft and just starting to brown a bit, about 20 minutes. Add the remaining marmalade ingredients, reduce the heat a bit and simmer until the liquid is reduced and the marmalade has a jammy consistency.
Brush the bread slices with olive oil and toast lightly on both sides, either on a grill or under the broiler. Spread with the mascarpone cheese, then with about a tablespoon of the onion marmalade. Top with the salmon and sprinkle generously with the arugula.  You can make these a little ahead to this point and refrigerate. When ready to serve drizzle with the limonolio.  Serves six.
NOTES: 1) Mascarpone cheese is available in many supermarket cheese cases. If you can’t find it mix one 3-ounce package of softened cream cheese with two tablespoons of sour cream.
2) Limonolio (lemon flavored olive oil) is available at both Whole Foods and Fresh Market, but you can also grate the zest of a couple of washed and dried lemons into about a half cup of good olive oil and let it set for an hour or so before using. If you do that, you will need to refrigerate any leftovers. 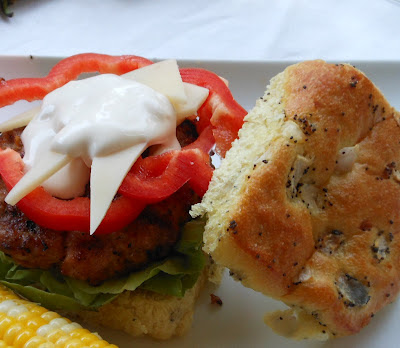 Neighbors were coming for a casual supper recently, and I wanted to grill.  Everyone likes hamburgers but I wanted something a little different.  I had just done a well-loved Spanish-style marinated pork tenderloin for the rehearsal dinner of a friend’s son and wondered why I couldn’t put the same spices into a pork burger.
I used manchego, a Spanish sheep-milk cheese, to top the burgers. It has a brown wax coating that I trimmed off so the cheese could be thinly sliced.  It’s pretty widely available but Swiss cheese would make a good substitute.
The sauce I serve with the pork tenderloin, a sherry aioli, is easy to make and still delicious if you prefer to omit the sherry.  I usually use an oloroso sherry because I like the full flavor and sweetness it lends. .  But any kind of sherry will work, except for the oversalted cooking sherry available in grocery stores.
Spanish smoked paprika is a wonderful spice, available in most supermarkets and at Penzeys. I prefer the sweet (not hot) variety, but if you like more spice, the hot one would also be good.
I added a slice of red bell pepper and a crisp lettuce leaf to each burger, put it on an onion roll and the guests pronounced it perfectly delicious.
Typically I roast the pork tenderloin on a bed of potatoes, so oven-roasted potatoes were the side dish the first time I made these. I thinned a spoonful of the spice mixture with additional olive oil and tossed them in it before roasting. The burger was so tasty that I made them again and this time I spread butter mixed with lime zest on fresh corn-on-the-cob, wrapped them in foil, and roasted them on the grill as the burgers cooked. That made quite a lovely companion dish as well.

Mix all sauce ingredients together and refrigerate until ready to serve.
Drop the garlic, one clove at a time, into a food processor with the motor running. When chopped, stop the motor, add the remaining ingredients and pulse until well combined. Scrape down the sides a couple of times. It will make a grainy paste. Add the paste to the pork, mix well and form four burgers. Chill until ready to cook.
Slice the top off the pepper and scoop out the seeds and membranes. Cut crosswise into ¼” thick rings.
At dinner time, cook the burgers over medium-hot coals until just done through, about five minutes on the first side, and two to three minutes on the second.   Internal temperature should be around 150-degrees.
Put the lettuce on the roll bottom, top with the burger, then the cheese and pepper ring. Drizzle with the sauce and enjoy!  Serves six.