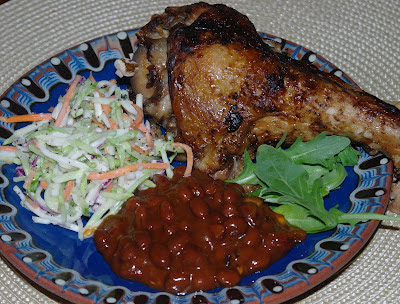 Occasionally a reader will send a recipe that sounds really good, and I almost always give it a try so I can share it with you.  A few months ago one of those readers, Mark Tygesson, sent one that sounded way too easy.  Of course I tried it at home. I served it first as a dinner entrée, with mashed potatoes and broccoli. 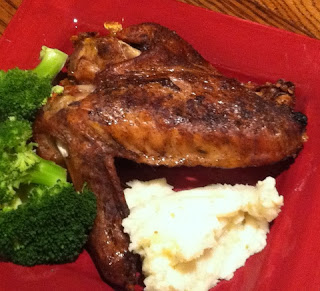 We loved it, but I thought it would a great dish for a bigger group, served a little more casually. So last weekend when it was time to watch March Madness, I made it for the soon-to-be disappointed fans of various teams who watched some of the games with us.

It was so popular that I’m pretty sure it will be on several other tables for the Final Four this weekend.  Perhaps you’d like to have it on yours too. It has the advantage of being extremely easy, extremely tasty, and adaptable to several ways of serving.

Turkey wings are available in most local supermarkets, but are not always with the rest of the turkey parts. Ask at the butcher counter if you can’t find them. Turkey wings are REALLY big, so one will serve two generously, and maybe even three.  Just the drumette part of each one we’ve gotten was way bigger than a regular chicken drumstick.

You can, of course, serve it as we did the first time, as a dinner main dish.  Last weekend we served the segments with broccoli cole slaw, chipotle baked beans and corn bread. The leftovers made a tasty pulled turkey sandwich the next day, and would be another very good way to serve first time around.

I served the flavorful juices from the pan as a sort of au jus sauce, as well as with bottled BBQ sauce.  I mixed half each mustard BBQ and regular BBQ sauce and it was the perfect complement.  However you choose to present it, I’m pretty sure your friends will enjoy it as much as ours did.

NOTE:  Since in Memphis pretty much our only chance for supermarket shopping is Kroger, and they don't stock nearly the variety of products that sadly departed Schnucks did, there seems to be a problem finding the Wham seasoning.  You can order it on the Willingham website if you can't find it in your local supermarket. Add on note: there was a comment added to this post that SuperLo has the Wham seasoning.

Rinse the turkey wings and sprinkle very generously on all sides with the Wham seasoning. Cover and refrigerate at least overnight.  When ready to cook, place in a crock pot and sprinkle the garlic cloves around them. No added liquid! Cook on low for six hours.  .
They are delicious as they come out, but I like a little crisper skin, so I put them on a baking sheet. and run under the broiler for a few minutes. Cut each wing into three segments and serve with the garlic cloves and pan juices.

NOTES:  1) Mark emphasized that it must be the “real” Wham seasoning.  I used the mild variety, but there’s a  hot one too.  You may use that one if you’re into spicy food.   2) He adds a bag of frozen Italian beans about a half hour before the wings are done.  I haven’t tried that but it sounds good, so I will next time. 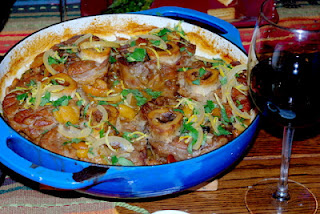 When I first went to study in the South of France, it hadn’t been more than ten or twelve years since the first of their North African colonies had been liberated, and only three or four years since the last, Tunisia, had been liberated. (Boy, I’m really dating myself!) I had several friends whose parents had been “pieds-noirs,“ or “black feet”, those who had been French nationals in the territories and had to leave. Many of them had never before set foot on continental French soil.
The dinners I had at their homes were nothing like what I’d had in French restaurants or other French homes. I fell in love with the flavors, and when I worked in Paris the following summer, I sought out the many small North African restaurants in the student neighborhood, the Quartier Latin.
Still, it was years before I attacked this style of cooking, first to learn to cook it and then to teach it to others. My initial inspiration came from the fine cookbooks on the subject by Paula Wolfert.
Recently I was having friends over for dinner and had picked up veal shanks for osso buco. This is the Italian term for veal shank slices, meaning “bone with a hole”. I wondered why I couldn’t turn this into a North African dish. So I did, with considerable success.
It would typically be served with couscous, but I served it with a rice pilaf instead. Roasted asparagus made the perfect complement. The marrow in the bones is delicious, so set the table with tiny spoons or seafood forks so it can be dug out.
The spice mixture, ras el hanout, can be purchased from Penzey’s, or you can make your own from the recipe below. For our dessert, I mixed a spoonful into chocolate ganache, which I used to fill little sweet tart shells. And it is very interesting as a spice in apple or peach pie. It’s also great dusted over sliced oranges and black olives on a salad, or mixed with olive oil as a rub for poultry or pork.
Moroccan Veal Shanks
6 slices veal shanks, about 1-1/2” thick (total about four pounds)
½ cup flour
2 tsp. ras el hanout, divided
¼ cup olive oil
1 large onion, diced
4 cloves garlic, thinly sliced
½ tsp. ground cumin
1 tsp. ground ginger
Juice and finely grated zest of two large lemons
2 cups chicken stock
½ cup each dried apricots, halved, and golden raisins
½ cup whole blanched almonds
Garnish: slivered zest of two lemons and ¼ cup, packed, chopped cilantro
Preheat the oven to 325. Pat the veal shanks dry with a paper towel. Mix the flour with 1 tsp. ras el hanout and lightly dust the veal shanks on both sides. In a heavy skillet, heat the oil over medium heat. Brown the veal shanks on both sides, starting with the side with the larger bone end. As they are browned, remove to a roasting pan with a cover, just large enough to hold the meat in one layer. Place the smaller end down, so that the marrow remains in the bone.
In the same pan, sauté the onion and garlic in the remaining oil until very soft but not browned. Add the remaining ras el hanout, ginger and lemon juice and zest. Stir a couple of times, then add the chicken stock and dried fruit. Bring to a simmer and pour over the veal. Sprinkle the almonds around the edges, cover, and bake for two hours.
For the garnish, combine the lemon zest with the cilantro and sprinkle over the top. Serves 6.
Ras el hanout:
1 tsp. each freshly grated nutmeg, ground black pepper and ground white pepper
2 tsp. each ground cinnamon and ground cardamom
1/4 tsp ground cloves
1/4 tsp cayenne pepper

Mix all together. Keeps a long time at room temperature in a tightly covered jar.
Posted by Alyce at 3:20 PM 4 comments: