A Paella Party for the Masses! 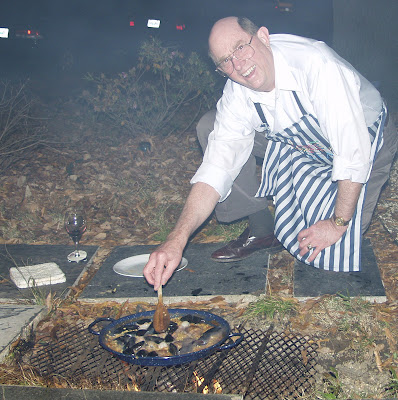 When it comes to learning new styles of cuisine, Larry and Mimmye Goode go all out. When they first got a time-share apartment in the New Orleans French Quarter, they went to classes to master the art of gumbo, oyster-artichoke soup and other Creole specialties.

A friend in New York introduced them to Thai food years before Thai was cool in Memphis. They sought out Thai restaurants in New York and New Orleans, and I was with them in London when, one chilly, night, we wandered through the rain and mist looking for a highly recommended Thai restaurant. Then they made several trips to Thailand, taking cooking classes in Chiang Mai.

In another phase, a brush with Indonesian food took them to Ubud, in Bali, for classes in the guest house of a prominent cookbook writer; they’re going back there later this year.

So it came as little surprise to their friends when, after reading that the best paella in Spain is prepared over a wood, fire, Larry dug a pit in the side yard of their East Memphis home, lined it with stone, put a grate on it and invited everyone to help. 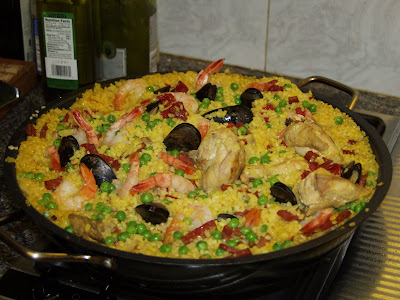 Over the years this has become an annual affair. The guests, this year numbering more than 30, bring an appetizer or dessert and a bottle of wine, and mingle while the paella cooks.

There are stories: the year it rained and umbrellas were held over the fire pit until the paella was done; the year the firemen came after a neighbor saw the smoke and called them.

Two kinds of paella are made, one of all seafood to accommodate the non-meat eaters in the crowd, and another of the traditional sort, with chicken, shrimp, shellfish and chorizo.

Why not give it a try? You probably aren’t going to dig a hole in your yard, but you can use a gas or charcoal grill; toss on some wood chips for a good smoky flavor. It can also be prepared on top of the stove with excellent results.

If you’d like to include the seafood paella, just follow the directions, leaving out the chicken and chorizo, and using seafood stock as your liquid.

Get all your prep work done ahead, invite a few friends, who’ll supply the appetizers and desserts, and make your paella when they get there. Who knows? You might start your own tradition!

In a paella pan or heavy 12” skillet, heat the olive oil over medium heat. Sauté the chicken without crowding, turning a couple of times, until the skin is golden brown and crispy. Remove to a plate and reserve. Add the garlic, stir a couple of times, then add the onion. Cook, stirring frequently, until the onion is tender and lightly browned. Add the rice and stir until coated with the onion/garlic/oil mixture. Nestle the chicken pieces in the rice.
Meanwhile, bring the stock to a boil, add the saffron and reduce the heat to simmer.
If you’re using a grill, preheat it and put the pan over the hottest part. Add the stock by ladlefuls, waiting until most of it is absorbed before adding more. After about 10 minutes, add the chorizo and shrimp, pushing down into the rice mixture. Gently mix in the peas. Then put in the clams and mussels, hinge side down. Continue adding stock until the rice is almost tender. Scatter the peppers on top and cook until the shell fish are open (discard any that don’t) and the rice is tender but still firm in the center. The consistency of the paella should be very moist but not soupy. You can serve this immediately, but often in Spain it is served almost at room temperature. Serves 10-12.

NOTE: These specialty short grain rices are available in gourmet markets and some supermarkets. 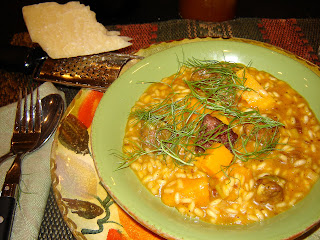 I've had several folks e-mail to ask for a good risotto recipe. It brings to mind a dish I made back in the fall. I've become quite a fan of several online "blogs." One of my favorite ones is "Stephen Cooks." Its author, Stephen Smith, cooks the way I wish I had time to, and I've tried many of his recipes. This one was adapted from one of them, and I know you’ll like it.

Risotto is an Italian rice dish, almost always served there in small quantities, as a first course. Cooked over a low flame, constantly stirred, with the liquid added gradually, it turns into a creamy, not-quite-soupy dish. It is imperative to use the right variety of rice; Uncle Ben's won't work! It must be a short grain rice, such as arborio, vialone nano, or my favorite for risotto, carnaroli. These are imported from Italy and have a firm core, but with a softer outside that dissolves in the cooking process to give just the right creamy consistency. It is true Italian comfort food, and perfect for this time of year.

I made it as a main course, and accompanied it with a salad of slivered fresh fennel and red bell pepper with a red wine-oregano vinaigrette. The flavor of the fresh fennel nicely echoed the fennel seed in the recipe, and I used the feathery fronds to garnish the dish.

One of the drawbacks for many is that it should be eaten as soon as it is finished. But you know how I love to have my friends gather in the kitchen, nibbling on an assortment of appetizers, as I finish dinner. I know your friends won’t mind, either, when they have their first taste!

Wash and dry the squash, rub it with oil and bake on a sheet pan in a preheated 400o oven for about an hour, or until easily pierced with the tip of a knife. When cool enough to handle, cut open. Scoop out and discard the seeds and dark orange membrane from the center. The hollow body of the squash will be softer than the solid neck; scoop it into a bowl. Dice the firmer portion from the neck and reserve separately. (You can do this ahead and refrigerate for up to a couple of days.)
In a large heavy pot, cook the pancetta and the sausage, breaking up large clumps with a wooden spoon, until browned and crispy. Add the red wine and simmer until absorbed. Remove about a fourth of the mixture and reserve for garnish.
Meanwhile, cut the leeks in half lengthwise, then crosswise into 1/4” half rounds. Rinse well and place on a paper towel to drain. Bring the stock to a simmer in a separate pot.
When the wine is absorbed, add the leeks and cook, stirring, until soft. Add the rice and fennel and stir constantly until the rice turns milky white. Stir in the reserved softer part of the squash. Add a couple of ladles of the simmering stock and continue to stir as it cooks. Continue adding stock, a ladle at a time, just enough to keep it fairly soupy. After 15 minutes, begin to taste the rice. It should be soft on the outside but still firm, but not hard, in the middle. It will probably take no more than 20 minutes total to reach the right texture. When done, add the grated parmesan, butter and fennel seed. Ladle into flat soup bowls and top with reserved squash cubes and meat mixture. Pass a chunk of cheese and a grater at the table. Serves 4 to 6 as a main course.

NOTES: Pancetta is a sort of un-smoked Italian bacon, available at specialty markets. If unavailable, just leave it out. For the grated cheese, I prefer either imported parmigiano reggiano, or the more affordable but still very flavorful grana padano. 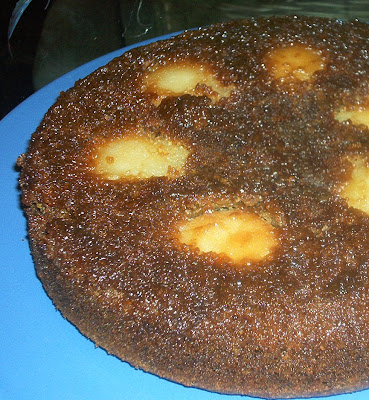 I was having dinner with a group of friends recently and they asked what my next column would feature. When I told them, there was general astonishment: "Dessert? You're doing a dessert?! But you don't DO dessert!!"

I told them to just wait. It is an established fact that dessert is not one of my strong points. Mostly, I get my feelings sort of hurt if you're still hungry at dessert time. But this one is so easy!

Back in November, my friends Mimmye and Larry Goode invited me for dinner. Mimmye had a pear upside-down spice cake that she had made for Thanksgiving, and sent some home with me. I loved it; it wasn't overly sweet and sticky.

I asked about the recipe and found that she had used fresh pears that she poached and then made the cake from scratch. And that was the end of it for me, I thought. That was way too much work for a dessert in my own opinion.

But I got to thinking and here's what I did: I got canned pears and used gingerbread mix for the cake. It was easy, quick and delicious.

A couple of tips: the first time I made it I used a store brand of pears. They were of uneven size, several were broken, and the texture was a bit mushy. The next time I used name brand pears with much greater success.

And secondly: I tried both Hodgson Mills organic whole wheat gingerbread and Betty Crocker brand. Both were quite yummy but I preferred the texture of the Hodgson Mills.

Wrapped, this keeps well, and in fact gets better after a day or so. It reminds me very much of the taste and texture of the French spice cake "pain d'épices," so that's what we'll call it. Enjoy!

Preheat the oven to 350F. Put the butter and sugar in a deep 9-inch cake pan and put into the oven until the butter is melted. Remove, stir well and spread the sugar out evenly. Put the drained pear halves, rounded side down and pointy end toward the center, in the pan. Use six or seven, depending on how big they are. Don't crowd them.

Prepare the gingerbread mix as directed, using milk instead of water. Stir in the cinnamon and cardamom. Gently spoon over the pears, covering them completely and spreading the batter evenly. Bake as directed.

Let the cake cool on a rack for only five minutes (any longer and it might be hard to remove from the pan). Invert the pan on a cake plate and let cool. Cut into wedges to serve and garnish with whipped cream. Serves 6 to 8. 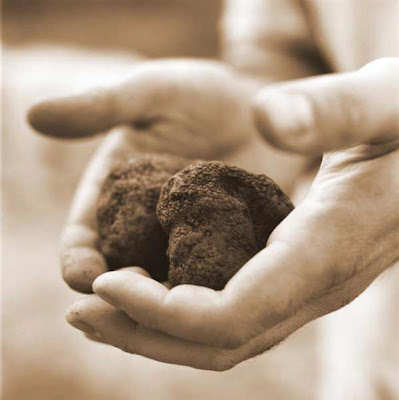 This week in the New York Times, there was an article that told of the finding of truffles, those funky smelling funghi, in East Tennessee. Trees with roots treated with spores of truffles were planted, and lo and behold! Black gold! Check out the whole story here.
Posted by Alyce at 4:25 PM No comments: