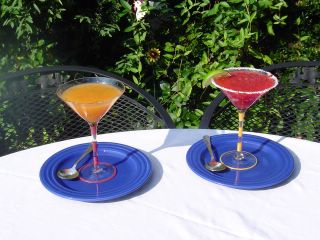 Lordie, isn't it hot? And there's nothing better on a hot summer evening than dinner with a cool salad main course. But it can be tough, if you're entertaining, to come up with an appropriate first course when salad is the dinner. Personally, I love a cold soup in the summer. For some it takes a bit of getting used to; I have friends who think the only good soup is a hot soup! But I think if you try it, you'll agree that it's a refreshing and delicious first course.

I've chosen two soups with the nuevo latino influence. Neither takes any cooking and either can be prepared in a jiffy with the aid of a food processor or blender. Whip them up in the morning, or even the night before, so they can chill well. And either makes a great starter for a summer salad dinner.

Reserve one cup of the diced watermelon. Puree remaining melon with almond flour, garlic and bread. Blend until smooth. Add vinegar, lime juice, salt and a couple of grindings of pepper. With the processor on, add the olive oil in a thin stream, blending until smooth. You may have to do this in two batches. Pour into a glass or ceramic bowl and stir in reserved melon dice. Chill well. Serve in wine or martini glasses rimmed with salt (add a little chili powder to the salt if you like). Sprinkle with the cilantro and garnish each serving with a lime wedge. Serves 6-8 as a first course soup.

*Available at gourmet markets and most natural food stores

Place all ingredients except lime zest and cilantro garnish in a blender or food processor and process until smooth. Transfer to a glass or ceramic bowl. Stir in lime zest and refrigerate covered until very cold. Serve in wine glasses, or flat soup plates, sprinkled with additional finely minced cilantro. Serves 6-8 as a first course soup.
Posted by Alyce at 2:54 PM 2 comments:

The best peach pie ever... 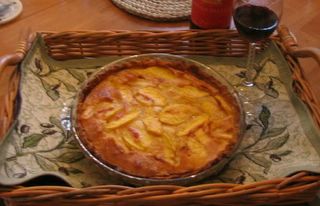 I have occasionally gotten e-mails, asking "Don't you ever make desserts?" Typically, my response is "Not usually." If you are still hungry at my house by the time we get to the dessert course, I sort of get my feelings hurt. I generally end a meal with a scoop of store-bought sorbet and a cookie, or a bit of really good cheese.
This isn't the case, however, when the local summer peaches are at their peak, as they are now. I love a good peach, just eaten out of hand. I like to stuff peaches with shrimp or crab salad for a luncheon entrée. I like to peel them and top with sour cream mixed with brown sugar and a bit of grated lime zest. I like to slice them into a baking dish, sprinkle with a little sugar, then with a one-layer white cake mix (such as Jiffy), dot with a stick of butter and bake until soft and golden brown to make a sort of cobbler I love them in salsa or chutney.

But perhaps my favorite way to serve peaches is in this simple peach pie, passed down to me by my mother. It was the peach pie her mother made. With the right peaches, you don't need vanilla, spices or seasonings to enhance the flavor.

We think of peaches as being a Southern U.S. crop, but in fact this fruit goes back as far as ancient oriental literature, where it was the symbol of long life. It made its way around the world, through Persia to Europe. It was brought to America by the Spaniards, probably in the 1500's. And in America peaches are grown all over the country, from the Atlantic to the Pacific, from Michigan and New Hampshire to Florida. But there is no question of which is the best: the one grown closest to home, picked when fully ripe.

To choose the right peaches for this pie, look for ones that are only slightly firm. Avoid any with green streaks showing; these were picked before maturity and will never ripen well. I like freestone peaches (meaning the fruit will separate easily from the pit), because I like the color the reddish interior gives to the pie. I usually use yellow peaches, although it also works well with white-fleshed peaches.

It can be served warm or at room temperature. You may, if you like, gild the lily a bit with a fluff of whipped cream. A little scoop of rich vanilla ice cream is a nice touch if the pie is still warm. This pie can be frozen in its pan after baking, wrapped in foil or heavy freezer paper. When you want a touch of summer, remove it from the freezer and let it thaw in the wrapping. Put in the oven to just warm through, and you'll think it was freshly made!

Preheat the oven to 350o. Fit the pie crust into the pie pan. Peel, stone and slice the peaches thinly. Slice the peaches over a bowl, so you don't lose any of the sweet juices that drip out. There should be enough to mound up slightly above the pan.

In a medium bowl, mash the butter with a wooden spoon until creamy. Mix the sugar and flour together and blend into the butter. Then beat in the egg. The mixture will be thick. Drop in spoonfuls on top of the peaches, spreading it about a bit. Don't worry if all the peaches aren't covered.


Bake in the center of the oven for about one hour, or until golden brown, and set in the center. If the crust starts to get too brown around the edges, cover with strips of foil during the last few minutes of baking. Serves two if one of them is me; otherwise serves 6-8.
Posted by Alyce at 1:43 PM No comments:

I don't know how I came across this, but I am all over it...where can I get these French jams that make you look young, that's what I want to know?

According to the text a little pot of one of these jams, taken a small spoonful or two a day, will offer to your skin the moistness of youth. At the price of 7 Euros (about $9.00) for a four-ounce jar...it had better be good!
Posted by Alyce at 2:46 PM No comments: 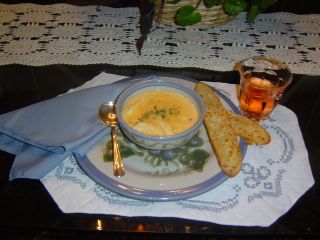 Hi, I am Alyce's sister, Cindy, and I have one important lesson for you today: While attempting to put up the umbrella on your patio table, it is imperative that you NOT use the edge of the table to get a little leg-up. You might go crashing to the ground, winding up with knee surgery and orders to stay off it for weeks. Does this sound like something that might have happened to Alyce? You betcha!

So, I've come from Knoxville to help her through the first week. Thanks to her friends, all of whom, it appears, are excellent cooks, the fridge is packed with goodies. I think everything is wonderful. Unfortunately, due to all the medications, everything tastes like sawdust to Alyce. Orange sawdust, rib sawdust, tomato sawdust--you get the picture.

You would think, wouldn't you, that a person in the food business would have a better stocked larder. Not so. But we dug around and found the ingredients for a very quick and tasty soup. We had the leftovers from an excellent roast chicken. There was a box of au gratin potato mix. With a few additions, and very little time or effort, we came up with what Alyce considered really good sawdust! Crusty bread and a salad would make a great Saturday lunch.

I'm not the cook in the family, but even I could make this at home for my friends. Bon appétit!

In a large soup pot over medium-low heat sauté the onion in the butter until very tender and just starting to brown. Add the stock, thyme, and the contents of all sauce and seasoning packets and bring to a simmer. Stir in the potatoes, bring to a simmer, cover and cook for about 20 minutes, or until the potatoes are just tender, stirring occasionally. If you used fresh thyme, fish out the stems if you can find them. Stir in the milk and chicken. You may need to add a little more stock for your preferred consistency. Bring back to a simmer and serve. Garnish with more fresh thyme. Bacon crumbles and sliced green onion would make a marvelous garnish, too. Serves 6 as a main course soup.

Note from Alyce: We used ¨loaded potato¨ flavor potatoes, but most any cheesy variety should work as well. We used half-and-half. It was very rich, and I would use milk the next time. And my sister can too cook, she just says that.
Posted by Alyce at 1:29 PM No comments: