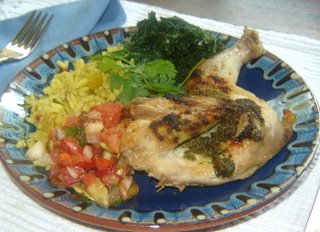 A friend of mine bragged about roasting a great chicken. He gently separated the skin from the flesh and rubbed a zesty cilantro pesto underneath and then roasted it, basting with oil mixed with more of the pesto. It sounded really good to me.

I don’t know about you, but although I love roast chicken, it’s a pain to do for guests. First, it’s got to be carved. And since it’s at its most visually appealing before carving, do I bring it to the table uncarved and then make a big mess carving it? Do I bring it to the table to show it off and then take it back to the kitchen and carve? Do I just carve it in the kitchen and be the only one to admire its pre-carved beauty?

And then, there’s the problem of parceling out the white and dark meat. Oh, it’s just too much trouble!

But, aha! There is a solution: Cornish game hens. They are usually just over a pound each. Many recipes call for a whole one per person, but I find that half is enough for nearly everyone. I do a few extra halves in case someone wants more. They come frozen and most supermarket butchers will saw them in half for you. If not, it’s easy enough to cut them through the breastbone and hack through the backbone yourself.

I did this for a group of friends who get together to cook semi-regularly. They all brought the appetizers and dessert and I made the dinner. The first course was a chilled soup; that’s for another time.

I was afraid the hens would need a little sauce, so I made a very spicy salsa to go with it, but as it turned out, the pan juices would have been enough. I accompanied it with steamed kale. I love kale because it doesn’t get limp like other greens, so it looks good on the plate. Just remove the large stems and cut into about 1” ribbons. I sautéed a little onion in olive oil and added about 1/2” of chicken stock in the pan. Bring to a simmer, add the kale, cover and steam for about 5 minutes.

For the starch, I have to confess that I used Zatarain’s Caribbean rice blend, from the supermarket. It has pineapple and coconut, for a touch of sweetness that was perfect with the hens.

I had a couple of hens left, and the next day, put them in a pot with the leftover pan juices and enough chicken stock to just cover. I simmered them a bit, then took them out and stripped the meat from the bones. With the leftover rice and kale added, it made one of the best soups I’ve ever had. Bonus time!

In a food processor, blend together everything except the hens. Starting from the breast side, carefully slip your fingers under the skin over the breast and back to the thighs. Using about half the pesto, spread it under the skin. Place on a baking sheet and brush with some of the remaining pesto. Cover and refrigerate a couple of hours. Remove from the refrigerator about a half-hour before roasting.

Preheat the oven to 375F. Place the baking sheet, uncovered, in the top half of the oven. Roast, basting occasionally with pesto, for about 40 minutes, or until the hens are golden brown.

Remove the hens from the baking sheet and keep warm. Place the sheet over the stove burner and add 1/2 cup each water and white wine. Simmer, scraping up all the browned bits with a wooden spoon. Pour into a little pitcher or sauceboat and pass at the table. Serves 6.
Posted by Alyce at 12:04 PM 1 comment: 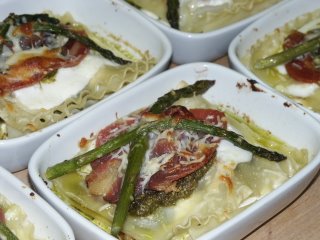 I am quite amazed at the number of food blogs to be found.
They can be about pretty much any aspect of food and food preparation, and can be as amusing (or, frankly, as boring) as the person writing it.

I got into some of the French and Italian language food blogs and have become quite addicted to several, checking in daily and being a bit disappointed if there is no new entry.

One of the ones I check regularly is “C’est moi qui l’ai fait” or “I made it myself.” This is written by a young French woman, wife and mother, who has quite a flair for interesting food combinations. And one of the recipes I found not only sounded quite tasty, but also sounded like one I could do ahead. I like that in a recipe! So I gave it a shot. And what a delight it was, even better than I had thought it might be. So of course I must share it with you.

The recipe calls for pancetta. This is a sort of Italian bacon, spiced, cured and rolled and available in specialty food markets. But it isn’t smoked, so our bacon wouldn’t be quite the same. My testing groug all thought prosciutto or other ham would be a little too lean. We finally decided that a good quality Italian salami might do the trick if you don't want to come to Mantia's for pancetta.

The original recipe also called for all goat cheese but I thought that might be a little strongly flavored for the other ingredients, so I mixed it with ricotta. And although the original recipe didn’t call for it, I roasted some asparagus and topped each serving with it, a felicitous addition. All in all, we loved it, and I bet your friends will too!

Preheat the oven to 400. Cook the noodles according to package directions in plenty of boiling well salted water. Drain and arrange on paper towels.

Place the pancetta slices in one layer on baking sheets and bake until done but not quite crisp, 10-15 minutes. Drain on paper towels.

Mix the goat cheese with the ricotta cheese.

Cut the noodles in half crosswise. In each of six individual oiled baking dishes place a noodle square. Top with a good tablespoon of the ricotta-goat cheese combination, a teaspoon of the pesto and a slice of pancetta. Repeat to make four layers altogether, ending with pancetta. Sprinkle with the cheeses. Bake for about 10 minutes, or until hot rhrough, and the cheese topping is melted and lightly browned. Serves 6.

In the best of all worlds, this would be made by hand, in an old-fashioned mortar and pestle. I just don’t think we’re going to do that, are we? So in a food processor, place the pistachios and garlic and pulse several times to chop coarsely. Add the basil and parsley and pulse several more times. Add a good sprinkle of salt and several grindings of black pepper. With the machine running, add the oil in a thin stream, just until combined.

This makes more than you will need for this recipe. Store the remaining pesto in a container in the fridge, covered with a thin layer of olive oil, and use as a pasta sauce, or mixed into a vinaigrette for a salad dressing, or as a crostini topping, or drizzled over almost any grilled meat, poultry or seafood.
Posted by Alyce at 8:39 AM 2 comments: 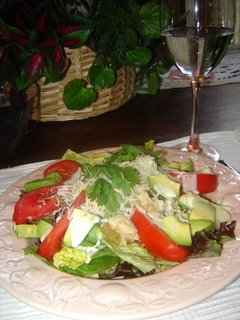 As hot as it's been lately, it’s hard to get excited about turning on the stove or the oven. A salad hits the spot, and with a little enhancement, a salad of canned tuna can become dinner. I like to use tuna packed in olive oil; I think it has a lot more flavor than the water packed type. You, however, may make your own decision about that.

If you are feeling a little more ambitious, you could replace the canned tuna with 12 ounces of fresh tuna, brushed with a little soy sauce and olive oil and grilled to medium-rare. Sliced thin and fanned out over the top, it makes a lovely plate. You could also toss the tuna, avocado and tomato with the greens and dressing, but I find the good stuff always goes to the bottom of the salad bowl when I do that. And I like the look of a "composed salad" better anyway.

I love the bags of pre-washed salad mixes from the produce section of the supermarket. You may use whatever blend you like best. Or you could wash and crisp your own lettuce…but I almost never do anymore. I like to serve this with packaged lime-flavored tortilla chips but crusty bread or even crisp crackers would be good as well.

I hope your friends and family enjoy this as much as mine did!

Mix all the dressing ingredients and chill at least an hour, or up to overnight, to mellow.
Drain the tuna and flake into large chunks. Core the tomatoes and cut into thin wedges. Peel the avocados and cut into 1/2” dice.
Put the salad greens on a large platter, or divide among four serving plates. Mound the tuna in the center and arrange the avocado and tomato around it. Drizzle with half the dressing. Scatter the cheese, chiles and cilantro sprigs over the top. Pass the additional dressing at the table. Serves 4 generously.

NOTE: If my guests are folks that I know will appreciate it, I might add half of a jalapeno pepper, seeded and deveined, and very finely minced, to the dressing. Or even a whole one.
Posted by Alyce at 2:15 PM 1 comment: