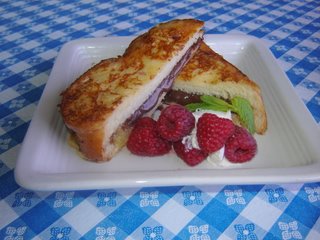 The food bloggers of the world are celebrating this delicious spread on February 6. So for the next couple of weeks, many of us will be posting a recipe using Nutella.

Years ago, when I first went to France to study, I spent a lot of time at the home of a friend whom I had met when she had been an exchange student in Louisville. She had a younger brother who was in elementary school. Dinner in France comes later than here, and he would come home from school ready for a snack to hold him over. His afternoon treat almost every day was a chunk of crusty baguette smeared with a chocolate-hazelnut spread: Nutella.

It originated in Italy in the 1940’s when chocolate was outrageously expensive because of the war rationing. Hazelnuts, on the other hand, were plentiful in the Piedmont area of Italy, and were used by the Ferrero pastry company to extend the chocolate, with cocoa butter and vegetable oil added to make it spreadable. Over the years it became popular all over Europe.

I loved the stuff! Each summer I would come back from France with a suitcase full that I would hoard over the months. On toast at breakfast, on waffles at brunch, warmed on ice cream for dessert…but finally I would sadly scrape the last bit out of the last jar.

I was delighted when Nutella was first imported into the USA in 1983. Eventually it became almost as popular here as it was in Europe. Initially available only in “gourmet” markets, it was quite expensive. With a plant built in New Jersey in the 90’s it has now become widely available, not just in specialty stores, but in the peanut butter aisle of most supermarkets.

A couple of weeks ago I wanted something fast and easy for dessert for friends. I had a challah, a slightly sweet egg bread made by Sherie McKelvie of La Morinda Bakery. I had a jar of Nutella. AHA!

This version of French toast made a good, but rich, dessert. You might want to try it after a simple meal of grilled meat or seafood and salad, or try it for a quick and easy brunch dish. I garnished it with raspberries, a dab of crème fraîche and a sprig of mint. Sliced bananas or poached pears would be equally good as a complement.

If you don’t have a loaf of challah around, you can use egg bread, French bread, or even pound cake (but then leave the sugar out of the egg mixture). In fact, it’s so good that I bet you could even use slices of sandwich bread and it would be quite tasty!

“Pain Perdu,” or “Lost Bread” is the French term for what we call French toast, so that’s what we’ll call it!

With a serrated bread knife, cut almost through the bread. Spread the Nutella evenly inside and press lightly together.
In a pie pan or other flat dish, whisk together the eggs, milk or half-and-half, sugar (if not using pound cake) and vanilla. Add the stuffed bread, turning several times, until most of the mixture has been absorbed.
In a medium non-stick skillet, heat the butter over medium heat. Add the bread and cook, turning once, until the egg mixture is cooked through and the outside is golden brown. Serve at once garnished as desired. Serves four. 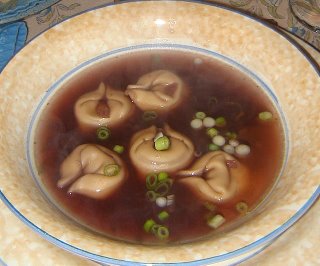 A few years ago a friend and I made a trip to Italy. We started in Bologna and made a big circle, through Tuscany, and back to Bologna.

We were very fortunate that a friend in the wine business set us up for a visit to a vineyard a little off the beaten path in the Chianti region. Afterwards, we were looking for a place for lunch and driving through the town of Greve-in-Chianti, noticed a small restaurant down a side street--exactly the kind of place I like to find when traveling in Europe.

It was small, and most of the tables were filled with locals. It smelled wonderful. The menu was short but had some very interesting selections. One we saw at another table was a stuffed chicken neck--with the head still attached. We didn't try that.

But one dish I loved was "tortellini in brodo rosso." The legend is that the tortellino was inspired by a glimpse of the navel of Venus by an innkeeper who was so enchanted that he modeled a pasta after it. According to tradition, tortellini are served only "in brodo," or in broth. This was in a broth based on Chianti wine, rather than a clear broth, and was wonderful.

I came home and tried to re-create the dish, but had a hard time until I figured out the secret: red onions, which caramelize beautifully and add a depth of flavor and color to the broth.

With the holidays coming up, this would make a lovely first course (as it is served in Italy), or a good weekend supper with just a salad. Be sure you have some crusty bread to soak up the last of the broth.

Tortellini are found in the supermarket with the refrigerated fresh pastas. I used cheese tortellini, as they did, but I think this would be equally good with either chicken or sausage filled ones. Just be sure you use a young and fruity wine for the broth.

In a Dutch oven, heat the olive oil over medium-low heat. Add the onion and garlic and cook, stirring frequently, until the onion is soft and translucent. Sprinkle with the sugar, stir and turn the heat to very low. Continue to cook, stirring often, until the onion is caramelized, about 20 minutes more. Add the red wine and cook until reduced by about half. Add the stock and bring to a boil. Turn down the heat, add the tortellini and simmer until just tender, 7 to 10 minutes. Taste and adjust seasonings.
Ladle into flat soup bowls and sprinkle with the green onion. Pass the parmigiana reggiano cheese with a grater for each person to add his own. Serves 6 as a first course, or 4 as a main course.

I have a friend from England who has often spoken of "mushy peas." Sounds pretty yucky to me, but look at this! A website dedicated to them! Who knew?
Posted by Alyce at 10:26 AM 4 comments: