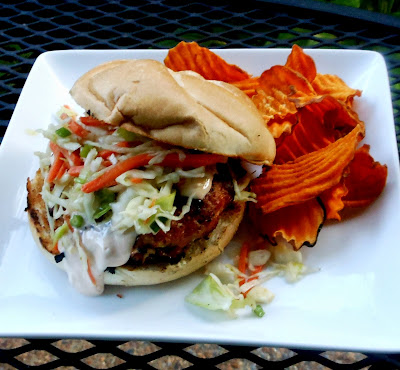 I think most everyone loves a burger on the grill. But sometimes, by the middle of summer, we’re tired of the same old beef burger every time. I recently had a friend accompany me to an occasion where her support was most welcome. Afterwards, we came back to the house. I’d made the burgers and slaw earlier in the day and within a very short time the grill was hot and the burgers were on.
I had picked up cole slaw mix, the kind with carrots already in it, but I wanted more carrots. I was going to grate them myself, but as I passed by the salad bar and saw the nifty long strands of carrot, I picked up a container of that instead.
I thought the slaw would be enough for a topping, but after tasting, we thought it still needed a little something, so I whipped up the sesame aioli. It was the perfect finishing touch.
I served it with store-bought sweet potato chips, which went very well with the flavor of the burgers. If you are a bit more ambitious, roast cubes of sweet potato and toss them with a little more of the sesame aioli and chopped cilantro for sweet potato salad.

Spicy Oriental Pork Burgers
1 ½ lb. ground pork
2 green onions, with some of the green, very thinly sliced
2 cloves garlic, minced
1 tbsp. ginger paste from the produce section (or 1 ½ tbsp. grated fresh ginger)
2 tbsp. Thai sweet chili sauce
1 tsp. Oriental sesame oil
1 tbsp. soy sauce
6 Kaiser rolls (or other crusty buns)
Asian Slaw (recipe below)
Sesame Aioli (recipe below)
In a bowl, combine all ingredients for the pork burgers. Form into six patties about 5” in diameter. Place on a plate, cover with plastic wrap and refrigerate at least an hour so flavors meld, or until ready to cook.
On a very hot gas or charcoal grill (or stove-top ridged grill pan) cook five to six minutes per side, until no longer pink in the center.  Place on the buns, top with the slaw and drizzle with the aioli.  Serves six.
Asian Slaw
1 bag cole slaw mix
1cup shredded carrot
1 minced green onion
3 tbsp. cilantro leaves, chopped
2 tbsp. soy sauce
2 tbsp. rice wine vinegar
In a bowl, combine the slaw mix, carrot, green onion and cilantro. In a small bowl, whisk together the soy sauce and vinegar. Pour over the slaw and toss together.  Let set at room temperature for up to an hour, or cover and refrigerate for up to 2 days.
Sesame Aioli
¾  cup mayonnaise
1 tsp oriental sesame oil
1 clove garlic, very finely minced
Mix together, cover and refrigerate until ready to use.