A tasty brunch for any occasion... 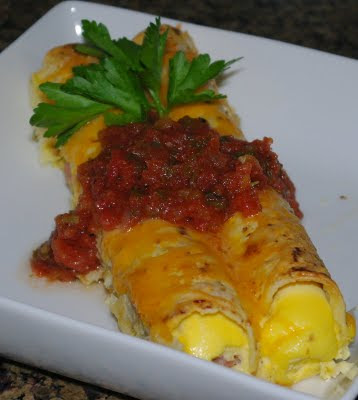 I know I’ve mentioned before that I’m from Louisville, and that the high social season there revolves around the Kentucky Derby, held the first Saturday in May.

Of course when I lived there I had to have a party at some point. But the trick was to schedule it so I wouldn’t miss any of the other good ones. My solution: a brunch on Sunday after the Derby. Nobody else did that so I was assured a good turn-out. One constant of a Derby party is ham (it would be good country ham) and another would be something involving asparagus.

Tomorrow is Derby Day, and we’ll be watching. But in case you’re not a horse race fan, remember that Sunday is Mother’s Day, and I bet your mama, or your childrens’ mama, or somebody you know would love to have a nice brunch to honor her.

I used ham because I had Easter ham leftovers but diced roast chicken or turkey would work equally well. And I used purchased fresh salsa but there’s no rule that says you can’t make your own if you are so inclined..

Grease a 9x13 baking dish. Combine ham, Monterey jack, onions, green chiles and salsa or chile seasoning. Spoon about 1/3 cup of this in center of each tortilla. Top with an asparagus spear. Roll tightly and place in prepared dish. (This can be done a day ahead, covered and refrigerated.)

Preheat oven to 350-degrees. Combine eggs, half-and-half, flour, Tabasco, salt and pepper. Beat well. Pour evenly over tortillas. Bake 35-40 minutes, or until eggs are set. Sprinkle cheddar cheese over the top and bake an additional five minutes or so, until cheese is melted. Remove from oven and let set for about 5 minutes. Serve with salsa.

Serves four to eight, depending on the guest list.