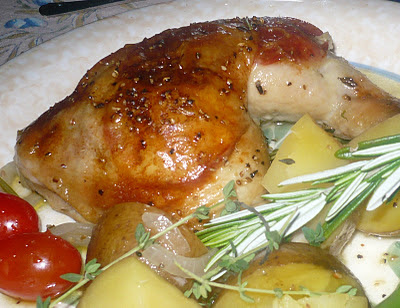 Everyone's talking about the high price of almost everything lately.  And lots of companies are cutting back on hours, or cutting jobs entirely.  The news is full of examples of folks cutting back on expenses because of it all.
That certainly doesn't mean you have to cut out everything you like to do.  Such as having friends for dinner.  Which is something I really like to do!  It may not be the filet mignon you might have had a year or two ago, but there's no reason to deny yourself the pleasure of your friends' company.
I belong to a couple of cooking groups, and we generally share the responsibilities of the meal.  A while back, I had a group of friends over and everyone brought a course to share.  I made the main course and everyone loved it.  Guests contributed a couple of appetizers, a salad, a vegetable and dessert.
The dish I made for my dinner was one I had made a couple of times before, always with great success.  I am a big fan of dark meat chicken.   You can simmer it longer in seasoned broths or sauces, so that it soaks up all the yummy factor flavors.  Chicken breast meat would be way overcooked in the same amount of time.
And in the interest of economy, you can't get much more penny-wise; chicken leg quarters are about one-third the price of hamburger meat.  This main course, even if you have to buy the herbs instead of growing them yourself, should be under $2.00 per person.  The first time I made it, I had read about a similar dish described in a review of an out-of-town Spanish restaurant.  I used Spanish chorizo and Spanish manchego cheese.  Last week, I used pepperoni and Parrano cheese.  The result was equally delicious, and undeniably a fraction of the cost. A nutty Gruyère would suit equally well.
And most of the prep can be done ahead. I cut up the potatoes and left them in cool water  I stuffed the chicken legs and tucked them in the fridge.  Then all I had to do was assemble the dish, and stick it in the oven an hour before we ate.  No basting, no watching.  How could it be any better?
PEPPERONI CHICKEN
8 chicken leg quarters
4 ounces pepperoni, thinly sliced
6 ounces Parrano, gruyère or Jarlsberg cheese, not too thinly sliced
3 lbs. red-skin potatoes, washed and cut into large cubes
1 large onion, cut in half from stem to root ends, and sliced
1 package fresh thyme
2 bay leaves
2 cups dry white wine (or chicken stock)
1/4 cup (or as needed) extra-virgin olive oil
Salt and pepper
Preheat the oven to 350o.  Rinse and dry the chicken pieces.  Run your fingers under the skin to separate it from the flesh.  Under the skin slide three pepperoni slices.  Under the pepperoni cover the flesh with slices of cheese.  (It's easier to put the pepperoni in first.  Trust me on this.)
In a baking pan large enough to hold the chicken in one layer, spread out the potatoes  Add the onions, about 1/3 of the thyme and the bay leaves, and toss to combine well.  Place the chicken on top.  Tuck another third of the thyme around and under the chicken.  Pour the wine or stock evenly over the chicken.    Brush the chicken generously with the olive oil.  Sprinkle with salt and plenty of fresh-ground black pepper.
Cook for about an hour, or until the chicken is done through and a rich dark golden brown  Serve at once, garnished with the remaining thyme.   Serves 8.