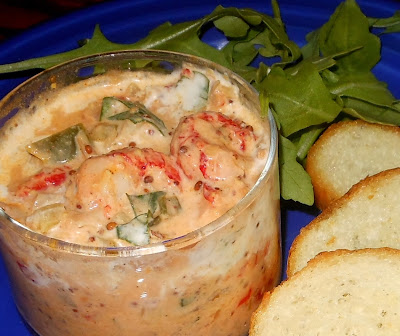 A few weeks back I wrote about a Southern Louisiana dinner with my wine group.  I not only filled in for the person designated to bring dessert, which resulted in my “Pumpkin Pie in a Glass.” I also brought a first course to complement the theme.
I made a recipe I’ve been making since my long-ago days of living in New Orleans. If memory serves, it came from the local newspaper, The Times-Picayune, although I can’t find anything similar online.
In my recipe software files, it’s listed as “Crawfish Bella Luna.” Bella Luna was a beautiful restaurant in the French Market in New Orleans. It had a great river view and a very talented chef.  Unfortunately, it was badly damaged at the time of Hurricane Katrina and never re-opened.
The recipe calls for a pound of crawfish tails. You can buy them frozen in many supermarkets, or ask the seafood department of your favorite market to order them for you. Due to current news items, I would avoid any from China. I got mine from Thomas’ Meat Market in Collierville. The ones they sell are from Spain, and I felt quite comfortable using them.
The recipe includes what is known in Creole cooking as “the trinity”: celery, onion and bell pepper. You could save a bit of prep by using a 12-ounce bag of frozen Creole mirepoix. It’s usually in pretty big pieces, just drop the frozen contents of the bag on your chopping board and run a sharp knife through it. It will take a bit longer to cook through, since you’ll have a good bit of moisture to cook off before the vegetables start to cook. But it has the advantage of saving a good bit of chopping time.
This is one of those recipes that can be made a day ahead and refrigerated, making it good for a cooperative dinner, as our wine dinner group is.
We served it as a seated first course. I put a handful of arugula with a light sherry vinaigrette on the side.  If you wanted to make it a lunch or brunch main course, just make the salad bigger and add grape tomatoes, slivered red onion and a sprinkle of feta or gorzonzola cheese.
Crawfish Bella Luna
3 tablespoons butter
1/3 cup onion, very finely minced
1/3 cup celery, very finely minced
1/3 cup green bell pepper, finely minced
1/3 cup green onion, with some of the green top, finely minced
2 plump cloves garlic, minced
½ cup mayonnaise
¼ cup Zatarain’s Creole (or other whole grained) musta
rd1 tablespoon flat-leaf parsley, minced
2 teaspoons Worcestershire sauce
1 tablespoon Creole seasoning, such as Tony Cachere’s
1 egg
1 pound frozen crawfish tails, defrosted in the bag
½ cup heavy creamSweet paprika for garnish
Preheat the oven to 350o. Heat the butter in a skillet over medium heat. Add the butter. When just starting to sizzle add the onion, celery, bell pepper, green onion and garlic. Cook, stirring occasionally, until vegetables are just starting to get tender, about 5 minutes.
Remove from the heat and whisk in the mayonnaise, mustard, Worcestershire sauce, Creole seasoning. Mix well, then whisk in the egg. Add the crawfish tails and all the juices from the bag and toss. Divide among 8 half-cup ramekins. Pour two tablespoons of heavy cream on the top and sprinkle with paprika.
Bake until browned and bubbly, about 15 minutes. Serve with crusty bread or baguette toasts.

I haven't read your blog in forever. So glad I found it again. This sounds amazing!