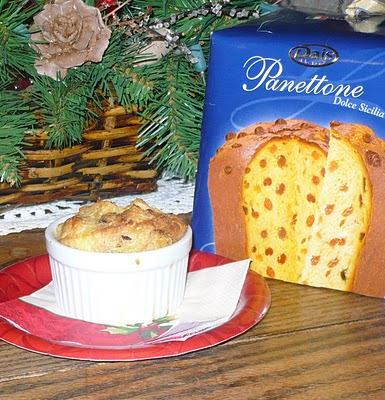 The Italians are big on Christmas traditions. There are several traditional sweets for the holiday season. One is panettone, a yeast-raised cake with raisins and citron in it. It might be served toasted with breakfast tea or coffee, or slathered with mascarpone cheese and served with Marsala wine in the afternoon, or after dinner, with a glass of spumante wine.

There are many legends about the origin of panettone (as, it seems, there are about many Italian traditional foods). The most common cites a baker named Toni, who had a beautiful daughter. A young man who worked for Toni wanted to marry her. In an attempt to impress the father, the young man created a special sweet bread filled with fruits. The bread made Toni's bakery famous. People began to call the bread "pan ad Toni" or Toni's bread. Of course, he allowed the young man to marry his daughter.

Although they are usually available in specialty food markets only around the holiday season, I buy a few extra to keep, because a panettone makes the best bread pudding you’ll ever have. I like to make it in individual ramekins, as you see in the picture. They come out of the oven puffed and brown and fragrant. But it can also be made in a 9-inch by 13-inch casserole. Either way, it’s a very moist dessert and needs no sauce.

I love it with either amaretto or Grand Marnier as the liqueur, but I have a friend who made it with hazelnut liqueur and loved it. If you’d rather not use the liqueur, substitute either a teaspoon of almond extract, or the finely grated zest of an orange. It will still be a wonderful ending to your holiday meal, and any leftovers will be great warmed over for brunch the next day.

Preheat the oven to 350 degrees. Peel the paper off the panettone and trim off the darkest outsides. Cut the remaining cake into ½" cubes.
In a large bowl, with a wire whisk, beat the eggs with the sugar and salt until light and fluffy. Beat in the half-and-half until the sugar is dissolved. Whisk in the liqueur and vanilla.
Butter ten to twelve 6-ounce ramekins and add the panettone cubes. Divide the egg mixture among them and let set for at least a half hour at room temperature, or up to two hours.
Bake for 30-45 minutes, or until a thin knife inserted near the center comes out clean. For the souffle effect, serve immediately from the ramekins. If you prefer, let them rest until time for dessert (they will deflate a bit) and unmold onto serving plates.
If you prefer to make it in one casserole, baking time will be about 45 to 50 minutes, but it will need to set at least ten minutes before you cut it.
Posted by Alyce at 6:21 PM

I like to take panettone and make French toast. It's yummy.