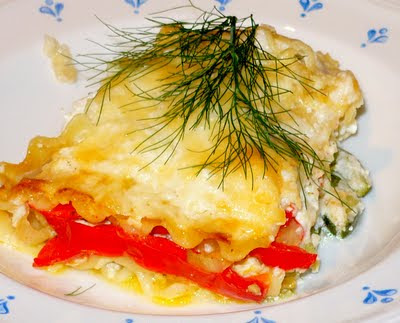 On that first cold, gray, rainy day we had last Sunday, friends were coming to help do a little fixing-up for me at my house. I had promised to make dinner, planning to grill out but the weather put a stop to that. Comfort food, that’s what we needed on a day like that, so I made lasagne.

I had seen a recipe on a French language blog that gave me a starting point but as usual, I had my own ideas of what I wanted it to taste like.

This takes a little more work than I usually ask of you, and dirties a lot of prep bowls, but you can do it well ahead, even the day before, and have a perfectly clean kitchen by the time you want to pop it into the oven. I see no reason why it couldn’t even be frozen, but you’d had to thaw it completely in the fridge before baking.

Preheat the oven to 350-degrees. Cook the lasagne noodles in plenty of salted boiling water for about 6 minutes. Drain and lay flat on a kitchen towel until ready to use.

In a large heavy skillet, melt two tablespoons of butter over medium heat. Add the leeks and sauté, stirring occasionally for a couple of minutes. Add zucchini, toss to combine with the leeks, cover and cook for about 5 minutes. Remove to a bowl with a slotted spoon, leaving as much butter as possible.

In the same skillet, add two more tablespoons of the butter, and one tablespoon water. Add the bell pepper and fennel. Toss to coat with butter, cover and cook for about 5 minutes, stirring twice. Uncover and sauté until water is evaporated. Remove to another bowl with a slotted spoon.

Add the remaining butter to the pan. When melted, whisk in the flour. Cook, stirring constantly for two minutes. Whisk in the milk and cook, whisking constantly until thickened (it will be fairly thin). Add salt and half the goat cheese crumbled into chunks. Whisk until cheese is melted and set aside.

Combine ricotta and pesto in a small bowl.

NOTES: I keep pesto in the fridge most of the time. You can buy tubes of pesto in specialty markets that would work beautifully for this. The kind that comes in jars also works well. You can grate your own cheese, or find a pre-grated Italian cheese mixture of asiago, fontina and parmesan in the dairy department of your supermarket.
Posted by Alyce at 12:20 PM