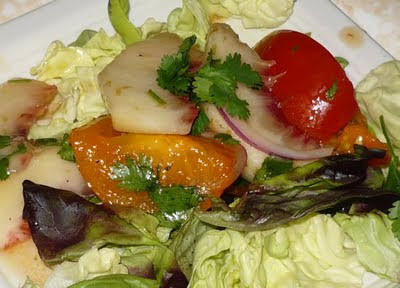 A couple of weeks ago, in the New York Times, Mark Bittman, one of my favorite food writers, had a story titled "101 Simple Salads for the Season." They were brief descriptions, not recipes, but certainly adequate for a reasonably competent home cook to put together something tasty.
Several appealed to me (and you’ll probably hear about some of them later this summer) but one just called my name. His formula: "Mix wedges of tomato and peaches, add slivers of red onion, a few red pepper flakes and cilantro. Dress with olive oil and lime juice. Astonishing." I had to make it, or at least my version of it.

I had a couple of white peaches that were perfectly ripened, not too soft but still very fragrant. I also had several heirloom tomatoes I’d picked up at the farmers’ market. It was a wonderful salad and beautiful as well. It would make a perfect accompaniment to almost any grilled meat or seafood. You absolutely must try it. If you are one of those who cannot abide cilantro, fresh basil would make a lovely substitute.

Peel the peaches and cut into thin wedges. Wash and core the tomatoes and cut them into similar sized wedges. Place in a bowl with the onion and about half the cilantro leaves, very finely minced. Wash the limes, dry them and finely grate the zests into a small bowl. Add their juice, the honey and the mustard and whisk well. Slowly whisk in the olive oil. Taste and add salt and pepper if you think you need it. It may seem a bit tart at this point but it will go perfectly with the sweet peaches. Pour about half of the dressing over the salad Toss well and let sit at room temperature for an hour or so, or refrigerate up to several hours. To serve, divide the salad greens among 6 plates and top with the salad. Garnish with the remaining cilantro leaves, unchopped. Pass the remaining dressing at the table. Serves six as a side salad.

NOTE: I think I would love this with some chilled, cooked shrimp added as a main course salad for four.
Posted by Alyce at 7:06 AM